Managers of high-tech companies insist they need more H-1B visas for foreign IT workers to ensure access to the best and brightest workforce.
https://www.andhrawishesh.com/ 06 Mar, 2013 06 Mar, 2013

H-1B Workers Not Best Or Brightest!

H-1B Workers Not Best Or Brightest! 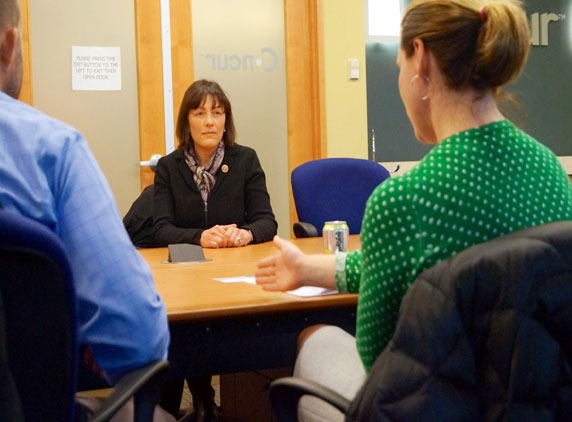 Managers of high-tech companies insist they need more H-1B visas for foreign IT workers to ensure access to the best and brightest workforce. But according to a study which was released on Thursday finds that imported IT talent is often less talented than U.S. Workers.

Moreover, the study, published by the Economic Policy Institute and conducted by Norman Matloff, professor of computer science at the University of California in Davis, compares U.S. and foreign IT workers' salaries, rates of PhD awards, doctorates earned and employment in research and development to determine whether those admitted to the U.S. under the H-1B visa program have skills beyond those of U.S. IT workers.

In fact, based on Matloff's analysis, there's no evidence that those granted H-1B visas offer exceptional talents.

Matloff writes in his report that they thus see that no best and brightest trend was found for the former foreign students in either computer science or electrical engineering. Rather in the CS case the former foreign students appear to be somewhat less talented on average, as indicated by their lower wages, than the Americans. As well the report concludes that the H-1B program and related work programs are not making the U.S. companies more innovative and are in some ways making them less so.

The technology industry sees things differently while it insists there's a shortage of IT talent in the U.S., based on the lack of students graduating from science, technology, engineering and math disciplines (STEM). Earlier this week, Code.org, a nonprofit organization that aims to encourage more students to learn programming, published statements from tech industry leaders that reflected the widespread assertion that there's a tech talent shortage.

On the other hand, Facebook founder and CEO Mark Zuckerberg put it in one such statement, that their policy at Facebook is literally to hire as many talented engineers as they can find. There just aren't enough people who are trained and have these skills today.

Other tech industry leaders have been saying as much for years, which is why immigration programs like H-1B exist. And the tech industry's sustained complaints about lack of access to technical talent recently lead to the introduction of the Immigration Innovation Act of 2013, which aims to expand the number of visas available under the H-1B program.

As a matter of fact, outside the U.S. there are similar claims of an IT worker shortage. Last month, European Commission VP Neelie Kroes bemoaned the growing digital skills gap that threatens European competitiveness.

Critics of the H-1B program see it as a way for companies to keep IT wages low, to discriminate against experienced U.S. workers and to avoid labor law obligations.

In his examination of the presumed correlation between talent and salary, Matloff observes that Microsoft has been exaggerating how much it pays foreign workers. Citing past claims by the company that it pays foreign workers "$100,000 a year to start while Matloff says the data shows that only 18% of workers with software engineering titles sponsored for green cards by Microsoft between 2006 and 2011 had salaries at or above $100,000.

He added that as the fact remains, by contrast, 34% of Microsoft's green card sponsorees with financial analyst titles made over $100,000, as did 71% of its lawyers in the PERM data. "It would seem that, counter to its rhetoric, engineers are not top priority for Microsoft.

Moreover, Marnie Dunsmore, an integrated circuit engineer who has worked for companies such as Intel, said in an email that she believes the H-1B program has had the effect of making it easier to send jobs offshore and has discouraged U.S. students from seeking computer science education. And she disputed the notion that there's a shortage of U.S. IT talent.

Dunsmore recounted her experience with a recent job interview as a mixed-signal integrated circuit tester. The interviewer, she said, said was unwilling to conduct on-the-job training which in other words mean that he was not willing to let me sit down with the manuals, pick up what someone else has done, and allow her to spend a couple of weeks figuring out what test code he needs to have tweaked.

It seems that ten years ago, a test lab would have jumped at the chance to get an experienced circuit designer to do test design and coding. Now, they're so flooded with hiring options that they can turn their nose up at having to train, even for a few weeks, very experienced programmers and engineers.

To conclude, attend Interop Las Vegas, May 6-10, and attend the most thorough training on Apple Deployment at the NEW Mac & iOS IT Conference. Use Priority Code DIPR03 by March 9 to save up to $500 off the price of Conference Passes. Join us in Las Vegas for access to 125+ workshops and conference classes, 350+ exhibiting companies, and the latest technology. Register for Interop today!

Whatever it may be it still remains a prevalent fact that if they would have had such capable engineers then need wouldn’t have remained for the foreign brains. It's just an ego clash!
But of course, exception is everywhere!