CES 2013 being held in Las Vegas like always has some very enticing gadgets that would steal the stage and the show but this time Samsung's game has been the monopoly.
https://www.andhrawishesh.com/ 11 Jan, 2013 11 Jan, 2013 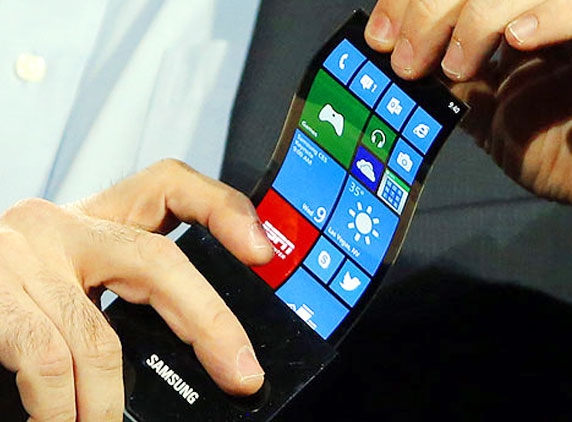 CES 2013 being held in Las Vegas like always has some very enticing gadgets that would steal the stage and the show but this time Samsung's game has been the monopoly. It showed a flexible screen, large LED TVs and thinner TVs with curved screen for better viewing angles and much more. Only to become another feather in its already rococo hat, Samsung has unveiled Yuom the flexible screen technology that allows a screen to be bent with the same viewability.

Its latest technology brings your dreams of being able to use your tablet and pocket it comfortably. Its latest screen technology is so flexible that you can roll the screen into a tube that can be rolled back flat and bent as you please.

Though it cannot be folded like a paper, flat, you can roll comfortably.

Yesterday, the head of the Samsung Electronics's display lab, Brian Berkeley, showed a matchbox-like box. He later pulled out a screen from it that was rolled like a wrapping aluminum foil in the case.

What is uses is a technology of OLED, organic light-emitting diodes. This is like your LED technically but the diodes which were solid components earlier have been replaced by organic gases which form a bright colorful screen. Though there are several phones that used the technology as of now, they were all en-sheathed by a glass screen making it impossible to bend. However, this screen is a high quality plastic which can be bent easily.

With this technology already in existence now, you can expect the makers to work on bigger phones and tablets which can be bent as required or even folded in the future to fit in the future. Curved screen mobiles are soon going to be a reality too.

There are cons too, the full functionality of the touch screen is not ergonomic with bent screens. Screens should be completely sealed from oxygen which might disrupt the whole screen as such.

The availability of the bendable screens is not yet known as Samsung didn't comment anything on the same but we may expect it in an year or two at the latest.