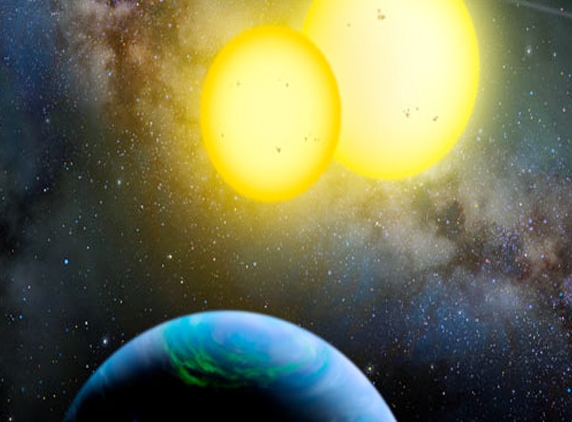 Kepler-34b and Kepler-35b both orbit a "binary star." They are actually a pair of gravitationally bound stars that orbit each other. While the existence of such bodies, called "circumbinary planets," had long been predicted, they remained just a theory until the team discovered Kepler-16b in September 2011. They dubbed Kepler-16b "Tatooine" because of its resemblance to the two-sun world depicted in the "Star Wars" film series.

"We have long believed these kinds of planets to be possible, but they have been very difficult to detect for various technical reasons," Ford said. "With the discoveries of Kepler-16b, 34b and 35b, the Kepler mission has shown that the galaxy abounds with millions of planets orbiting two stars."

The planets were discovered by measuring the star light decrease as the planets pass in front of, or transit, either of the two stars. Kepler also measures the star light decrease when one of the stars passes in front of the other. The mutual gravitational tugs of the stars and planets cause the times of the transits to deviate from a regular schedule, allowing astronomers to confirm the planet and measure its mass.

Both planets are low-density gas giants, comparable in size to Jupiter, but much less massive. Compared to Jupiter, Kepler-34 is about 24 percent smaller in size, but has 78 percent less mass. It can complete a full orbit in 288 terrestrial days. Kepler-35 is about 26 percent smaller, has 88 percent less mass, and completes its orbit around the stars much faster -- just 131 days.

The astronomers believe the planets are made primarily of hydrogen and too hot to sustain life.

"Circumbinary planets can have much more complex climates, since the distance between the planet and each star change significantly during each orbital period, the length of an alien planet's year," Ford said. "For Kepler-35b, the amount of incoming star light changes by over 50 percent within a single Earth year. For Kepler-34b, each Earth-year brings 'summers' with 2.3 times as much star light as winters. Over the course of a year, the change in the amount of sunlight heating the Earth varies by only 6 percent."

NASA's Kepler mission, which began in March 2009, uses a 1-meter space telescope trained on one small portion of the Milky Way for several years. Astronomers analyze data from the telescope for periodic dimming that indicates a planet crossing in front of its host star. The mission's goal is to find the frequency of Earth-size planets in the habitable zone of their host stars -- where a planet might have liquid water on its surface.

Most Sun-like stars in the galaxy are not alone, like Earth's sun, but have a "dance partner," forming a binary system or binary star. Kepler has already identified about 2,165 eclipsing binaries, of the more than 160,000 stars being observed.

NASA originally planned to stop receiving data from the Kepler spacecraft in November 2012.

"Astronomers are practically begging NASA to extend the Kepler mission until 2016, so it can characterize the masses and orbits of Earth-size planets in the habitable zone. Kepler is revolutionizing so many fields, not just planetary science," Ford said. "It would be a shame not to maximize the scientific return of this great observatory. Hopefully common sense will prevail and the mission will continue."