Women clad in pure silk (Pattu in Telugu) saris made a show off at Hyderabad in the event "Srimati Silk Mark 2013" organized by the Hyderabad Chapter of Silk Mark Organization of India.
https://www.andhrawishesh.com/ 26 Sep, 2013 26 Sep, 2013 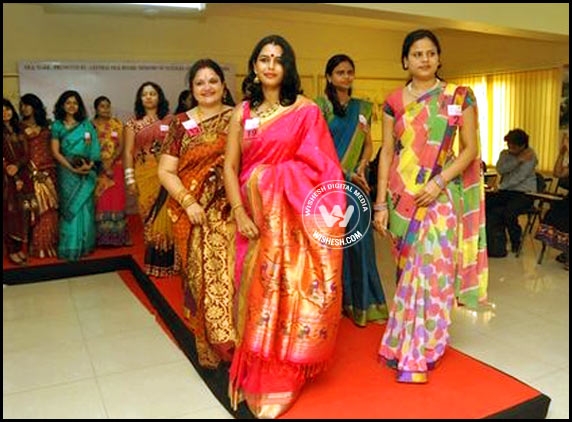 Women clad in pure silk (Pattu in Telugu) saris made a show off at Hyderabad in the event "Srimati Silk Mark 2013" organized by the Hyderabad Chapter of Silk Mark Organization of India.

Women wearing silk saris of different colors dazzled the on lookers. The organizers said that the aim is to introduce the traditional style of wearing a sari to the new generation and to preserve the tradition.

A sari multiplies womanly charm and one need not say anything about the beauty of a silk sari.  But because of the rush in the daily life modern women particularly working class are thinking that a sari is not comfortable for the brisk movement while walking, boarding a bus or moving on two wheelers.  Ready-made garments and casuals have taken the place of a sari.

As the custom of wearing voni (half sari) also has gone away gradually, the habit of sari wearing is also coming down but for the occasions of marriages and festivals and because of the adoration for the silk sari among women.

The rattling sounds out of the friction created by the silk sari coupled with the chirpy bangles brings a womanly flavor to the air that is sure to divert the subconscious thoughts of a male to slip into.

Many participants congratulated the organizers of Srimati Silk Mark 2013 for making an effort to keep the tradition alive.