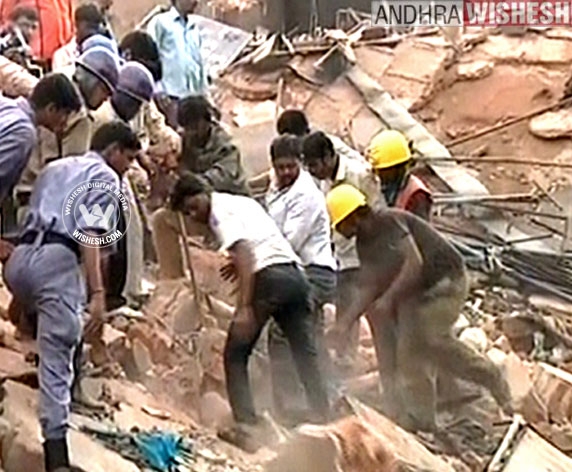 An age old building on Rashtrapati Road (RP Road) in Securnderabad collapsed today in the early morning at about 6.55 am.  The two storey building that housed a restaurant called City Light Hotel first tilted to its left side and then collapsed.   So far 18 persons are rescued and shifted to Gandhi Hospital and 6 out of them are reported to have dead.

No one is in a position to ascertain the actual number of persons in the building when it came down.  Authorities are estimating that a number of 20 may be still there either live or dead.  But the locals and eye witnesses say that about 50 persons may be there under the debris waiting for the rescue teams to get them out.  The debris show red soil with which it was constructed and also it shows that the construction is very old.

Locals first went to the rescue of the persons that were struck up under the debris.  Then Fire department, police and municipality personnel reached the spot.  Main reason for the collapse is said to be of its coming of age.  And added to it a water tank is recently constructed on the roof of the building that might have made the building buckle.

As it is a busy place with many going to the restaurant to have a cup of tea in the morning and a loaded truck also is found there with sand crew of which might have gone in to the ill fated building at that time, altogether a number of at least 40 persons are expected to be there under the debris as per the locals’ statement.

GHMC says that it served a notice long back to evacuate the building as it was old enough not hold any more.  But no one related to the restaurant is available to give the information about the collapse and possible loss.

An Old Building in Capital Collapsed