Despite gold rates hovering around 18,000 (for 10 gms), all roads led to jewellery stores this Dhanteras. Stores 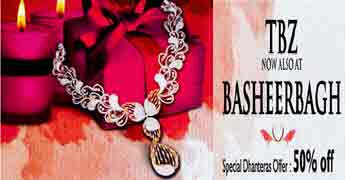 witnessed footfalls since afternoon, much before the auspicious time, and managers of leading city jewellery shops were optimistic of sales worth Rs 3-10 crore this season. And the heavy traffic into stores on the auspicious day ensured that the traffic police had their hands full too.

"People have bought gold, diamond and also gold coins. Sales is divided (among various items) so far. People are also buying gem-studded jewellery,'' said Tribhovandas Zaveri manager Sandeep Priya Swamy. The store was offering a 51% discount on making charges and intended to keep the shop open till midnight to catch those who were still weighing their options.

Most shops opened as early as 8 am to catch the early birds who wanted to finish their purchases before the peak hour traffic. And shoppers too didn't disappoint: quite a few store doorways on Wednesday resembled temple entrances with footwear piled up at the gates.

While stores across the city said that were nervous about the high gold rate, the response on Dhanteras was still beyond their expectations. The rate for 10 gms of gold at most stores hovered between Rs 18,200 and Rs 18,800 on Wednesday. Showroom managers said that while most were keen on investing in gold coins, those swearing by jewels still went ahead and made their bangles and earring purchases.

According to Meena Jewellers at GVK One mall, even the Swiss watches in their showroom were doing good. "Our gold watches are doing well. We have the lowest gold rate in the country at Rs 1,735 (per gm),'' said store manager Rajeev Odhrani. He said they could offer a low rate as they had planned much ahead of the festival and roped in quite a lot of wholesalers.