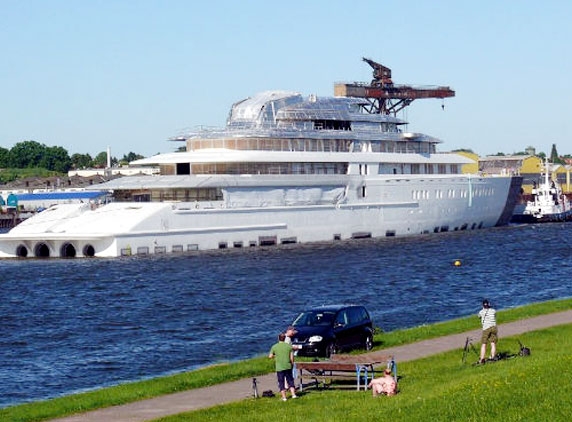 Germany which the world holds high for being the home of the world's premier cars's stable has several other aspects to boast too. This one, though still a mode of luxury transport, is slightly different. A luxury private yacht that has been recorded to be larger than any other existing ones.

Azzam, is a whopping 68 foot tall yacht that is 590 feet long. Place two football fields back to back and that is the size if you are unable to understand the numbers.

Interestingly, the size will not hold it back from achieving inconceivable speeds. This is also reportedly one of the fastest vessels. The only thing that might not be so pleasing to the eye about this yacht is the price that will do more than burn a hole in your pocket; 609 million USD.

Earlier the largest yacht was 57 feet tall, The Eclipse. Italian company Nauta Yachts takes some credit for this formidable yacht in the design section. The final construction was performed by the mechanical pioneers, German company Lurssen Yachts, who took four arduous years to bring the masterpiece to reality from the idea.

The private yacht's owner is not being revealed but it can be guessed that the owner would be a filthy rich Saudi royal.

The yacht runs on two gas turbines, two diesel engines which generate a total of 94,000 horsepower taking it to speeds over 55.5 kph. It needs at least 50 crew members to maintain it but there is no further info on the specs of the yacht.

The yacht will be a new milestone in the history of yacht manufacturing.