Ebay users are now vying against each other to gain the ownership of a piece of lingerie. However this is no normal bra as it spans over 2 tennis courts in length.
https://www.andhrawishesh.com/ 26 Oct, 2012 26 Oct, 2012 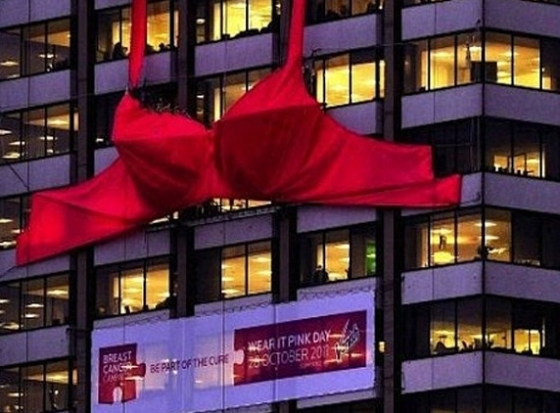 Ebay users are now vying against each other to gain the ownership of a piece of lingerie. However this is no normal bra as it spans over 2 tennis courts in length. Rest assured that it won't be used as a bra to cover and bolster a voluptous female's assets but the bidders are not worrying about the person who would wear them. The reserve bidding price was mentioned as £500 (Rs 42,800) and the size is mentioned as1,360B. In simpler terms the bra weighs 1800 times the traditional bra.

The current owner of the bra is the director of Chillisauce.co.uk, Adrian Simpson, who has been trying to raise funds for the Breast Cancer Campaign.

"Our aim in auctioning the bra is to build awareness and involvement in Wear It Pink Day as well as raise money for Breast Cancer Campaign in the process," he said. The final price would be decided on Sunday. So if you want to place a bid on the item you don't have a lot of time left.

Winning the bra also means you get more than what you bargain. You will receive an official copy of the Guinness World Records certificate.

Last October, it was suspended from the ITV Tower in London on the Wear It Pink Day to promote awareness.