Megaupload.com shutdown by US Feds. Megaupload CEO and others arrested for piracy.
https://www.andhrawishesh.com/ 20 Jan, 2012 20 Jan, 2012 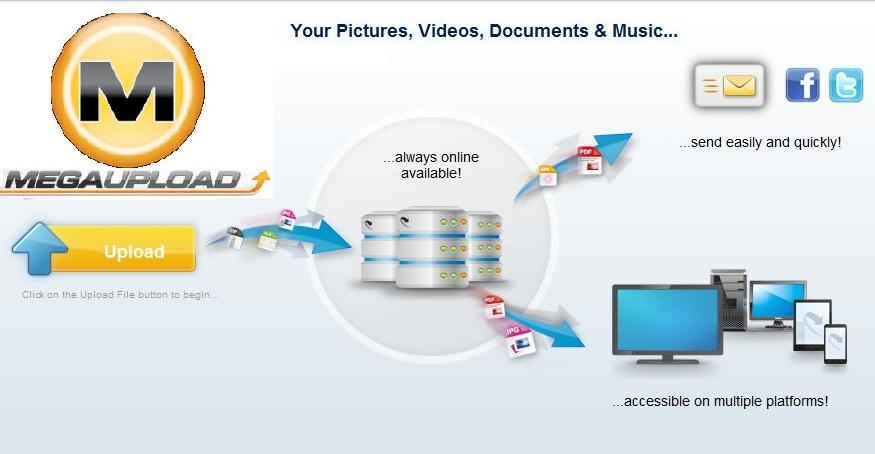 The Justice Department Thursday unsealed an indictment in Virginia charging seven executives at file-sharing site Megaupload.com with copyright violations, racketeering, and money laundering. Four of the people charged, including 37-year-old Megaupload CEO and founder Kim Dotcom (aka Kim Tim Jim Vestor, aka Kim Schmitz), were arrested by New Zealand authorities, while the others remain at large. Authorities accused Megaupload of running a bait-and-switch maneuver when copyright holders requested that their material be expunged from the site.

Dotcom, Megaupload's former CEO and current chief innovation officer, is a resident of Hong Kong and New Zealand and a dual citizen of Finland and Germany who had his name legally changed. The 37-year-old was previously known as Kim Schmitz and Kim Tim Jim Vestor.

News of the shutdown seemed to bring retaliation from hackers who claimed credit for attacking the Justice Department's website. Federal officials confirmed it was down for hours Thursday evening and that the disruption was being "treated as a malicious act." A loose affiliation of hackers known as "Anonymous" claimed credit for the attack. Also hacked was the site for the Motion Picture Association of America.

The feds accused Megaupload of amassing $175 million "in criminal proceeds" since the site was founded in 2005, which they said was used for everything from leasing servers and rewarding uploaders to buying high-end cars and renting yachts. In 2010, according to the indictment, Kim alone earned $42 million, while Mathias Ortmann, a Germany citizen who served as Megaupload's CTO, earned over $9 million.

Having the FBI coordinate international anti-piracy arrests and 18 related domain-name seizures just one day after mass protests against SOPA and PIPA produced a predictable response: The hacktivist collective Anonymous retaliated by launching denial-of-service attacks against 10 websites, including those of the DOJ and FBI, as well as the Motion Picture Association of America, the Recording Industry Association of America, and even the U.S. Copyright Office.

But it's clear that the feds didn't build their case overnight. Indeed, the DOJ's indictment against what it dubs the "Mega Conspiracy" reflects an investigation that took two years to build.

If convicted of all five charges in the indictment, the defendants face up to 55 years in prison. But Owen Seitel of Idell & Sietel LLP, an entertainment and IP law firm, told VentureBeat that "indictments by their nature are overreaching," and to not expect that all of the allegations would stand up in court. Furthermore, a lawyer for Megaupload told the Guardian that the the company would "vigorously" defend itself

With 150 million registered users, about 50 million hits daily and endorsements from music superstars, Megaupload.com was among the world's biggest file-sharing sites. Big enough, according to a U.S. indictment, that it earned founder Kim Dotcom $42 million last year alone.

Megaupload billed itself as an online storage locker for movies, music, and other files. For example, in response to an email from a copyright holder in 2007--contained in the indictment--which warned CEO Dotcom that he legally couldn't profit from other people's copyrighted works, Dotcom sent back this message: "We are a hosting company and all we do is sell bandwidth and storage. Not content. All of the content on our site is available for 'free download.'"

According to one chat transcript from 2008 quoted by investigators, for example, Bram van der Kolk, a Dutch citizen who oversaw Megaupload's programming and network infrastructure, allegedly said, "We have a funny business ... modern day pirates :)." In response, CTO Ortmann said, "We're not pirates, we're just providing shipping services to pirates :)".

The movie industry howled that the site was making money off pirated material. New Zealand Police also seized guns, artwork, more than $8 million in cash and luxury cars valued at nearly $5 million after serving 10 search warrants at several businesses and homes around the city of Auckland.

The indictment was unsealed one day after websites including Wikipedia and Craigslist shut down in protest of two congressional proposals intended to make it easier for authorities to go after sites with pirated material, especially those with overseas headquarters and servers.

Before Megaupload was taken down, the company posted a statement saying allegations that it facilitated massive breaches of copyright laws were "grotesquely overblown."

Several sister sites were also shut down, including one dedicated to sharing pornography files.

The $8 million in cash seized had been invested in various New Zealand financial institutions, and has been placed in a trust pending the outcome of the cases.

Before the website was taken down, it contained endorsements from Kim Kardashian, Alicia Keys and Kanye West, among others.

The Justice Department said it was illegal for anyone to download pirated content, but their investigation focused on the leaders of the company, not end users who may have downloaded a few movies for personal viewing.