China has expressed an interest in setting up military bases in Pakistan's volatile tribal area or the Northern Areas, close to the restive Chinese province of Xinjiang, to counter the activities of extremists, according to a media report on Wednesday. The Chinese desire is aimed at containing the growing terrorist activities of Chinese rebels of the al-Qaeda-linked East Turkestan Islamic Movement, ‘The News’ daily quoted diplomatic sources as saying.
https://www.andhrawishesh.com/ 26 Oct, 2011 26 Oct, 2011 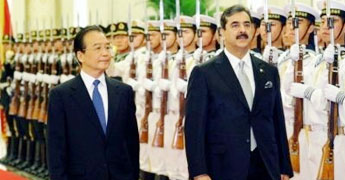 China has expressed an interest in setting up military bases in Pakistan's volatile tribal area or the Northern Areas, close to the restive Chinese province of Xinjiang, to counter the activities of extremists, according to a media report on Wednesday. The Chinese desire is aimed at containing the growing terrorist activities of Chinese rebels of the al-Qaeda-linked East Turkestan Islamic Movement, ‘The News’ daily quoted diplomatic sources as saying.

The Chinese rebels want an independent Islamic state and are reportedly being trained in Pakistan's tribal areas. China's wish to have a military presence in Pakistan was discussed at length by the political and military leadership of both countries in recent months as Beijing has become more concerned about the Pakistan’s tribal belt serving as a haven for radicals, the report said.

"Beijing believes that similar to the American military presence in Pakistan, a Chinese presence would enable its military to effectively counter the Muslim separatists who had been operating from the tribal areas of Pakistan for almost a decade and carrying out cross-border terrorist activities in the trouble-stricken Xinjiang Province," the report said.

There were three high-profile visits from Pakistan to China in recent months – by Foreign Minister Hina Rabbani Khar, President Asif Ali Zardari and Inter-Services Intelligence agency chief Lt Gen Ahmed Shuja Pasha. The Pakistani visits were reciprocated by a visit to Islamabad by Chinese Vice-Premier Meng Jianzhu. This visit was prompted by two bomb blasts in Kashgar city of Xinjiang on July 30 and 31 that killed 18 people, the report said.

The blasts provoked senior government officials in Xinjiang to claim for the first time in recent years that the attackers were trained in ETIM camps being run by Chinese Muslim separatists in Pakistan’s Waziristan tribal region. The report contended that Beijing believes the Chinese rebels operating from the Pakistani tribal areas are well connected to Al Qaeda, which trains them and provides funding.

"Therefore, Pakistan and China, which have been cooperating for a long time in the field of counter-terrorism, have intensified their efforts to nip the evil of terrorism in the bud, especially after the Kashgar blasts," it said.

In the aftermath of the May 2 raid by US troops that killed Osama bin Laden in his hideout in the Pakistani garrison city of Abbottabad that Islamabad started playing its "China card aggressively, perhaps to caution Washington against pushing it too hard", the report said.

Shortly after the raid, Prime Minister Yousuf Raza Gilani travelled to Beijing to seek support for Pakistan. Defence Minister Ahmed Mukhtar, who accompanied Gilani, said on May 21 that whatever requests for assistance the Pakistani side made, the Chinese government was more than happy to oblige, including agreeing to take over operation of the strategically located but underused port of Gwadar upon expiry of a contract with a Singaporean government company. Mukhtar had further said that Pakistan had asked China to begin building a naval base at Gwadar, where Beijing funded and built the port.

"We would be grateful to the Chinese government if a naval base is constructed at the site of Gwadar for Pakistan," he said in a statement. The daily quoted Pakistani Defence Ministry sources as saying that by having a Chinese naval base in Gwadar, Pakistan intended to "counterbalance the Indian naval forces".

The report quoted diplomatic sources as saying that China, which has no military bases till now outside its territory and has often been vocal in criticizing US moves to operate such bases, first wants to establish military bases in Pakistan that could be followed by the setting up of a naval base.

Therefore, Chinese National Defence Minister Liang Guanglie had dismissed on June 6 suggestions that Beijing was carving out a permanent naval presence in India’s neighbourhood in South Asia. Liang dismissed reports about a move to build naval bases at Gwadar in Pakistan and at a Sri Lankan port.

The daily contended that the Chinese desire to have military bases in Pakistan is not a new one and had been discussed in the past. It quoted unnamed analysts as saying that though it might not be politically feasible for the Pakistan government to openly allow China to set up military bases on its soil, Islamabad might allow Beijing the use of its military facilities, without any public announcement, as a first step.

The analysts claimed the repercussions of the growing Pakistan-China strategic nexus are "stark for India" because Beijing and Islamabad refuse to accept the "territorial status quo and lay claim to large tracts of Indian land, which could come under Chinese sway once Beijing is allowed to establish military bases in Pakistan".