Saudi Arabia traces back to 9000 years, Find out the latest news from andhra and the India in Andhrawishesh, Al-Maqar, 9000 year old, domestication, Saudi is a treasure from time immemorial
https://www.andhrawishesh.com/ 06 Sep, 2011 06 Sep, 2011

Saudi Arabia traces back to 9000 years

Saudi Arabia traces back to 9000 years 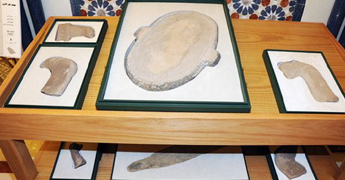 The excavations at Saudi Arabia have discovered a 9000 year old Al-Maqar civilization, named after the site. Great news for the subcontinent since the continent boasts of existence since times immemorial. Saudi is the chest of riches with unique antiques hidden under the sands, which can throw light upon culture & heritage of the kingdom.

This discovery will change our knowledge concerning the domestication of horses and the evolution of culture in the late Neolithic period, told Mr. Ali al-Ghabban, Vice-President of Antiquities and Museums at the Saudi Commission for Tourism and Antiquities,  in a news conference in the Red Sea port of Jeddah.

He further added, the Maqar Civilisation is a very advanced civilisation of the Neolithic period. This site shows us clearly, the roots of the domestication of horses 9,000 years ago. The site also includes remains of mummified skeletons, arrowheads, scrapers, grain grinders, tools for spinning and weaving, and other tools that are evidence of a civilization that is skilled in handicrafts.

Saudi Arabia, the world`s largest oil exporter, is trying to diversify its economy away from oil and hopes to increase its tourism. The SCTA launched exhibitions in Barcelona`s CaixaForum museum and Paris`s Louvre museum showcasing historic findings of the Arabian Peninsula, last year.