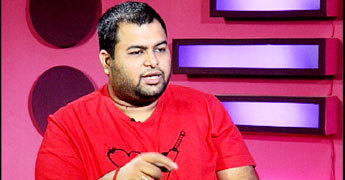 One song that is ruling the chart busters is ‘PoovaiPoovai’ from Mahesh’s ‘Dookudu’. The Movie is declared a super success, so as the songs of the film. Let’s know what the Music director of the film Thaman.S who is the wanted music director in South film Industry as well has to say about the film, and more about him;

About ‘Dookudu’ success and appreciation for music composed

Well, right from the beginning the success of the film is expected. It is only that many issues in the City and also in the film industry has cropped that delayed the release of the film. I had a complete confidence this film would be a memorable one in Mahesh’s career. Director SeenuVytla has made another complete entertaining film titled ‘Dookudu’. Mahesh has experimented with his role and adapted a complete different Body Language and this time, it worked. I am over whelmed seeing the response the film has been getting. I have been receiving the critical acclaim for the Music composed and particularly ‘PoovaiPoovai’, ‘Guruvaaram’, ‘Nee Dookudu’ are being appreciated. This success has given me a joy to work more and get more appreciation.

Though it may not appear, but my journey as a Music director itself has been a roller coaster ride. Though maximum number of films I have composed music for are a big success and till date I am getting some good offers, it was easy for me to be what I am today. I started off as an artist and have done Shankar’s ‘Boys’. But, prior to this, since the age of 8, I was into music and worked under some well noted music directors. It was director Shankar, who has recognized my worth as a Music director and has given me first opportunity to compose music for ‘Eeram’ that has been released as ‘Vishali’ recently. Of course, once the film makers started knowing my work, there was no looking back for me. But, till date each song I compose will be like the first time I am composing the music for. The same involvement, the same enjoyment and the same passion towards music that is making me sustain in this industry.

About the rumors of composing monotonous music

Every music director has his own style and giving the music for a particular narrated situation. So do i. it is quiet common that some of my tunes resemble to that of the composition earlier done by me. But, it so happens with every music composer. Rather than comparing, why don’t some people enjoy the music? It is just that how to I compose, my team packages the music. Similarities are always there. I would instead call it as a ‘My Kind of Style’. However, no film maker is innocent enough to hire a music composer and get same old tunes. People should know what they are speaking before they bitch about others.

I am composing the music for Mahesh’s another film with director PuriJagannath, ‘The Businessman’. I am more than happy to compose music for Mahesh, continuously for the second time. Director Puriis an amazing person and has a clear picture of what he wants from all the other technicians. He knows what he is doing and a gutsy director to admit even if he makes a mistake by making any film, that does not manage to entertain the audience. I am sure, just like ‘Dookudu’, Mahesh’s ‘The Businessman’ also would win the audience heart.

It means my breath. Since I have known this World, I have known Music. It is a reason to live and makes you distressed no matter what. I compose each and every song, imagining me listening to it as a common man. I will be doing the same even in near future. Music has made me what I am. I am glad that I chose music as my profession and making audience happy listening to my compositions.

Any plans to get into B – Town

I don’t plan anything. I just take it and move ahead each and every step, in my life. As of now, I am totally packed up with  T – Town and K – Town projects. I need to give some more good music for all these good films. But yes, if an opportunity comes, there is no language barrier for Music. I would take up the offers from B – Town as well. But, South film industry would be my priority as it has given my all the name and fame, that I am enjoying today.

I don’t believing in adivicing some one. Each of us is matured enough and knows what are doing. So, do it putting your entire soul into it and success would follow your way.And yes, nothing is possible to handle single handed. When it comes to music, putting all the notes in place and the sounding of the composition is also more important. All this would be done by a team of skilled people. So, work in a team and never forget to respect them as well, without whom you are not complete.

Well, expecting some more ‘mesmerizing’ music from this Music Director!

‘Oosaravelli’ a commercial film with a thought