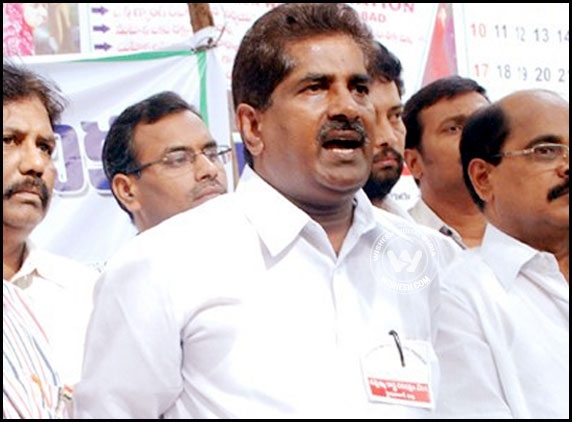 The Chairman Samaikya Parirakshana Vedika and Chairman APNGO's Association Ashok Babu said at Gudi Malkapur Hyderabad on Friday that the deceiving GoM's tricks will be revealed on Saturday. He said that the first meeting of the Samaikya Parirakshna Vedika after its registration is arranged at Hyderabad.  He said that every one interested in the united State can attend the meeting that is held by 500 member Samiti on Saturday.

Ashok Babu said that invitees are Tulasi Reddy and Buddha Prasad from Congress party, TDP leaders Payyavula Keshav and Somi Reddy, YSRCP leader Shobha Nagireddy and other leaders from MIM, CPI and CPM.  But, Ashok Babu says, no party symbols will be used by any in the meeting.

He revealed the future programs of the Samiti that pressure will be created by 175 MLAs and Chalo Delhi will be conducted on 14th and 15th December among many other programs.

Ashok Babu said that the main motto is to see that no region will be subjected to injustice.  He said that the 11 points GoM has taken up are not going to do good to any region and he feels it necessary that the people should be made aware of the fact.

Ashok Babu said that in addition to revealing the tricks of GoM many other programs are chalked out to see that the bifurcation process stops.  He also said that the GoM could go further only because of the strike called off after 66 days.  He said that the November and December months are crucial for the future of the state of AP.