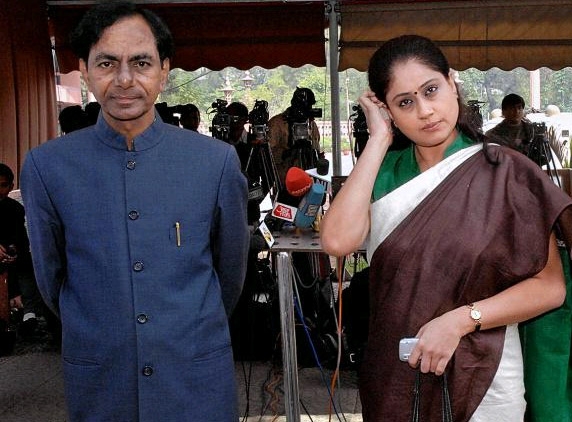 Medak MP Vijayashanti is suspended by TRS from her party membership.  Vijayashanti who was a staunch supporter of TRS and a deemed sister of TRS President K Chandrasekhara Rao until recent times took a deviation from that stand made some public announcements against the party.

KCR made a midnight announcement last night that Vijayashanti is suspended based on the decision taken by the party polit-bureau.

She has been keeping herself away from the party activities.  She has been telling her close ones that she cannot adjust in the party anymore as there are differences with some of the TRS leaders.

Although Vijayashanti accompanied KCR in some of the party meetings, she was neither mentioned nor given an opportunity to speak by KCR which reportedly made her feel bad.

Another point among many for the differences is the decision to change her constituency from Medak to Secunderabad.  She some has an attachement with Medak although she did not do anything notable to the constituency and as for some time she did not go to Medak at all, somebody commented that the MP is missing and a formal case should be registered with the police to find her.

In the meanwhile BJP is also trying to convince her to join it as TRS is going to merge with Congress party.  The party leaders also promised her that she will get honor in the party she deserves.