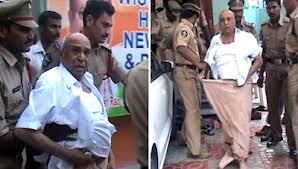 Former minister Shankar Rao, who was arrested by Hyderabad police, last night in connection with a land scam in the city, developed health complications, which made the police shift him to Care hospital in Banjara Hills this morning. Doctors have said that Shankar Rao underwent mental tensions and he was attacked by diabetes. Further, his blood pressure levels dropped drastically and showed difficulties in breathings, added doctors.

It is known that Shankar Rao was arrested in alleged inhumane manner with police leaving no scope for the legislator to change even his clothes. In fact, he was in a lungi, which was almost coming down and unbuttoned shirt. This act, which was telecast, on news channels reportedly created uproar among political circles. Danam Nagender, who reacted on the issue, has said that necessary action would be taken against the cops for arresting an MLA this way. He even termed the treatment Shankar Rao received as unfortunate. Further, Danam said the arrest was made without the knowledge of chief minister Kiran Kumar and he wrote a letter to CM urging to take action against responsible police officers.

Anyway, one has to wait and watch how chief minister is going to respond on this and why an MLA was arrested this way.