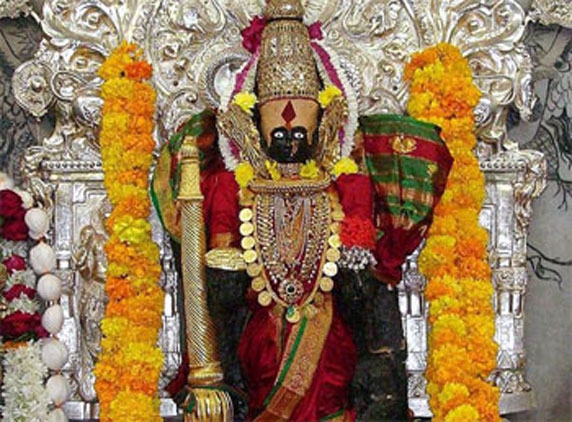 So later on the devotees eyes were puffed out as they came to know that the Goddess Mahalaxmi was wearing diamond-studded contact lenses, which was donated by an eye surgeon named as Chandrashekhar Chavan who hailed from Kolhapur but currenly living in Mumbai.

Padmaja Tivale who is a member-trustee of the Shri Mahalaxmi Kolhapur Devasthan Management Committee said that, Infact the contact lenses were made of small shinning diamonds and which is worth of Rs.80,000.As Chandrashekhar Chavan donated this diamond-studded contact lenses to seek Goddess Mahalaxmi blessings for a a new eye technique which has been developed by him that he is hoping to unconcealed.

Tivale said, It was Chavan's wish and desire to donate the diamond contact lenses and we cannot stop any devotee; so we respected his sentiments. However, on account of objections from some quarters, now we shall not display the contact lenses at regular darshans.

Considered to be over 5,000 years old, the 40-kg idol of Goddess Mahalaxmi here is made of gemstone and is studded with precious stones.

But controversy has erupted among devotees and media which has questioned the limits to which various temples and other religious places can go while accepting devotees' donations, however expensive they may be.

"When devotees visit a temple, they expect divine radiance from the eyes of the goddess, not the shine emanated by diamonds," fumed Jayshree Khadilkar-Pande, a prominent Marathi journalist who has strongly criticised Goddess Mahalaxmi's new 'look'.

Khadilkar-Pande said the diamond contact lenses actually block the goddess' divine energies believed to pass through her eyes on to the devotees.

However, temple priest Ajit Thanedar defended the move, saying it added to the beauty of Goddess Mahalaxmi's idol like the other jewels adorning her.

"Moreover, the diamond contact lenses are temporarily stuck to the eyes of the goddess and later easily removed without damaging it (the idol) in any manner," he claimed in a television statement.

He argued that just as the precious jewels and other holy articles of the idol are regularly changed, even the diamond contact lenses are a part of her belongings and the decision was taken unanimously by the temple managing committee.

Later, Thanedar conceded that following objections from some devotees, it has been decided to display the diamond contact lenses only in the presence of the donor and not on any other occasion.

The issue has triggered a debate among Goddess Mahalaxmi's devotees in the state, with many questioning the propriety of various temple trusts accepting whimsical donations simply to fill up their coffers.

"Tomorrow, if somebody offers sunglasses or a mobile phone, will the trusts accept it? Even if it is in the name of devotion or fulfilment of some wishes, the trusts must exercise wisdom before accepting any kind of donation which could hurt the sentiments of devotees," an angry Megha Patil of Thane, who happened to visit the Kolhapur temple last week.

Resting on a stone platform, and facing the west direction, the Mahalaxmi statue has four arms - the lower right hand displays a matulinga fruit, above that a large mace called kaumodak, and in the left lower hand is shown a bowl or panpatra and above that a shield or khetaka.

Goddess Mahalaxmi's crown comprises a cobra-hood with a Shiv ling and a Yoni around it, with a lion standing behind her - all evidence of her divine 'shakti.'

Listed among the 108 sites where 'shakti' is manifested, the Goddess Mahalaxmi Temple of Kolhapur is one of the Shakti Peetha in Maharashtra and one of the six sites of 'shakti.'

In what devotees consider a celestial phenomenon, a small window on the western wall allows the rays of the setting sun to fall on the face of the idol only thrice in a year - November, December and January - according to Tivale.

Tivale said "As lakhs of devotees who crowded the temple for a brief look of the attractive image of Goddess Mahalaxmi bathing in the golden rays of the setting sun, which was a wonderful view.