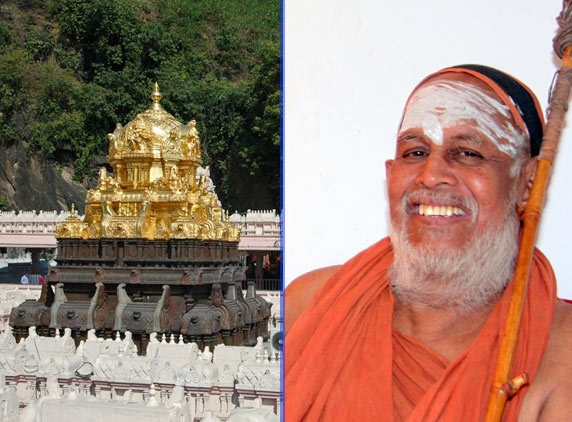 Sree Jayendra Saraswathi: The power of his love and compassion dissolves our miseries and takes us on the path of dharma.

The Kanchi Kamakoti Peetham pontiff Jayendra Saraswathi Swamigal visited the temple town Vijayawada in Andhra Pradesh, in the early hours. The seer visited Sree Kanaka Durga Temple in the town. The temple authorities greeted the seer with due respects. The seer was greeted with Purna Kumbham, a traditional honor given to an astounding personality. The seer after the darshan performed the Maha Kumbhabishekam at the temple. The ritual was a cynosure to the on looking devotees.

About the Temple: Sree Kanakadurga Temple is an ancient temple in Vijayawada city. The presiding deity of the temple is the goddess `Kanaka Durga`. Here, one can see the demon king Mahishasura lying under the holy feet of the goddess with her `Trident` ripping apart his heart. As per the legends, this is said to be the place where Arjuna performed a severe penance and obtained the sacred `Pasupathasthra` from Lord Shiva. The devotees can visit the temple from 4:30 hrs to 22:30 hrs. The archana timing of the temple is 4:30 hrs, 8:00 hrs, 14:00 hrs and 18:00 hrs.  (With inputs from internet: AarKay)