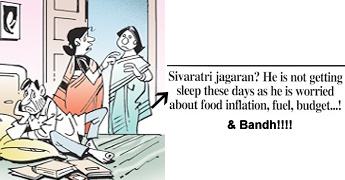 The Sakalu Janula Samme demanding the separate statehood for Telangana reached the twenty second day, today, with Telangana Joint Action Committee (JAC) of Nalgonda district has called for total 24 hours rasta roko of all highways connecting district, inview of the ongoing powercut announced by the government. This means no transport between Vijayawada, Guntur, or any other part of Coastal Andhra Pradesh to the capital. Police have taken up precautionary custody of the district fifteen JAC leader s, which includes Telangana Rashtra Samiti (TRS) district leader Narender Reddy who has been kept under house arrest. Meanwhile the State Transport Corporation protest has reached the sixteenth day.

The common mans problem has mounted to new heights with nature also playing its part. Hyderabad is almost clogged in water due to heavy downpour since dawn.

Elsewhere at New Delhi on Monday the TRS Chief K. Chandrasekhar Rao (KCR) meets the Prime Minister Manmohan Singh to press for his party's demand for creation of new state of Telangana out of Andhra Pradesh, hours after Congress MPs and legislators from the region met the PM. After the meeting KCR said the strike would continue till there is a roadmap for separate Telangana.

On Monday the passengers of private bussess that were plying to Hyderbad had afced the wrath of the JAC. Inspite of paying heavy rates for tickets as fares the passengers further faced inconvenience, the buses, which usually arrive in Hyderabad around 6 a.m., spent the entire day covering a distance of 170 km from Telangana border as protestors belonging to TRS, Bharatiya Janata Party (BJP) and Communist Party of India (CPI) stopped them at about a dozen points. The convoy of buses was stopped again in the evening at Choutuppal, about 50 km from here. Protestors pelted stones, damaging window panes of a few buses. They also clashed with policemen, escorting the buses. The passengers had a horrible experience and most of them stranded for hours without food or water.

The plight of the common man has compounded in all forms, is the government doing anything for us or is it just busy in plotting ploys to maintain power, is an unanswered million dollar question.