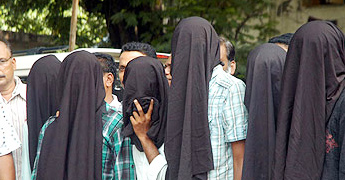 The arrested included the main accused Mr Vallabhaneni Naga Ragu, his wife Nalini, another woman Rajani and five others. According to sources, two special teams took them into custody last night in Bhadrachalam of Khammam district.

The eight persons left Vijayawada and were hiding in the Hi-tech city area of Hyderabad. They went to Bhadrachalam Wednesday morning and planned to go to Vijayawada from there. However, two special teams of the Vijayawada police, who kept a watch on their mobile phone conversations, left for Bhadrachalam and took them into custody last night.

Mr Vadlamudi Mohan’s body was found on a main road in Vijayawada during the night time some days ago and police thought it was an accident as his vehicle was also found damaged severely. Police later concluded that he was murdered by his rivals who left his body on the road to mislead the police.