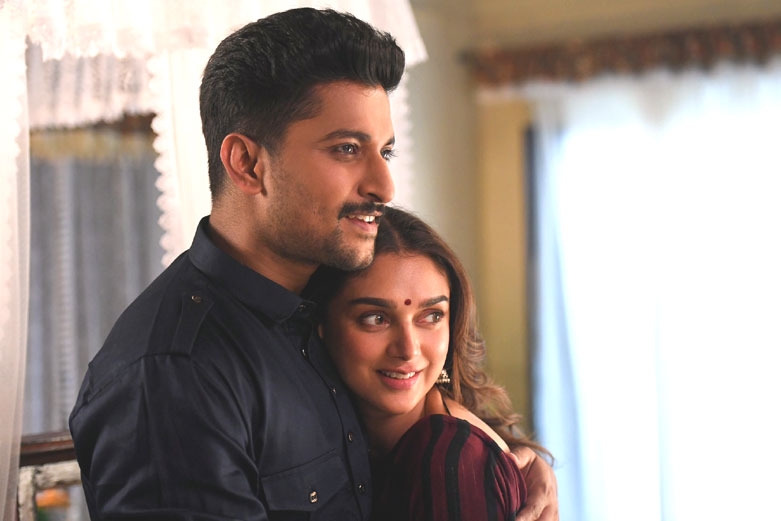 V is the story of Vishnu (Nani) and Aditya (Sudheer Babu) who are childhood classmates. While Aditya is the top cop in the town, Vishnu turns a serial killer because of some consequences that happen in his life. He challenges Vishnu to kill five people and the rest of V is how Aditya struggles hard to connect the dots and save the targeted people. Vishnu has a beautiful past that is shattered by the culprits and Aditya comes to know about this right before the last murder. Watch V to know about the other side of the serial killer Vishnu and his wife Saheba (Aditi Rao Hydari). Here is the complete review of V which is now streaming on Amazon Prime from today: 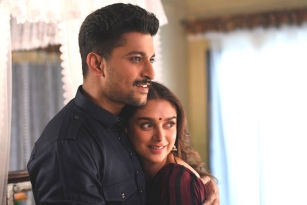 The first half of V makes a decent watch. The premises are well set and the audience feels interesting. V starts on an interesting note. The first half keeps the audience guessing and they wait eagerly to know what is happening. The interval episodes are good and they keep the audience in waiting mode to know what is happening. The backstory is pretty average and makes no impact. Nani plays an Army officer but the episodes are not convincing. The backstory fails to create an impact. After an impressive first half, the second half of V struggles to impress the audience. The pre-climax and the climax episodes make the film even worse.

Nani thrills in some of the episodes though he doesn't suit the role well. His sarcastic smile irritates the audience at times. He tried his best in the role and he is okay. Sudheer Babu looks perfect as a cop who wins all the appreciation in the society but gets targeted and challenged by a serial killer. He does his part well and his screen presence has been top-notch. Aditi Rao looks gorgeous in the crisp role and she delivered her best. Nivetha Thomas has a superficial role which may not appeal to many. Her dubbing is quite poor. Thanikella Bharani and Vennela Kishore look good in their limited roles. All the other actors have done justice for their parts.

V is a film that has nothing with the plot. It is all the screenplay that makes the difference. But unfortunately, the entire film looks predictable and the audience can guess what is happening around. The dialogues are ok but they do not make any impact. The songs are poor to listen and two songs are well shot on screen. The production values are grand and the film is shot in Hyderabad, Manali, Mumbai, Goa and Bangkok. The background score is good and the editing looks decent. Mohana Krishna Indraganti fails to convince the audience through a thriller which is not his cup of tea. A complete pale attempt.

V is a pale and predictable attempt that fails to live up the expectations. Nani struggles to look natural as a serial killer and Sudheer Babu's character has no great prominence. Thanks to Amazon for skipping a theatrical release.