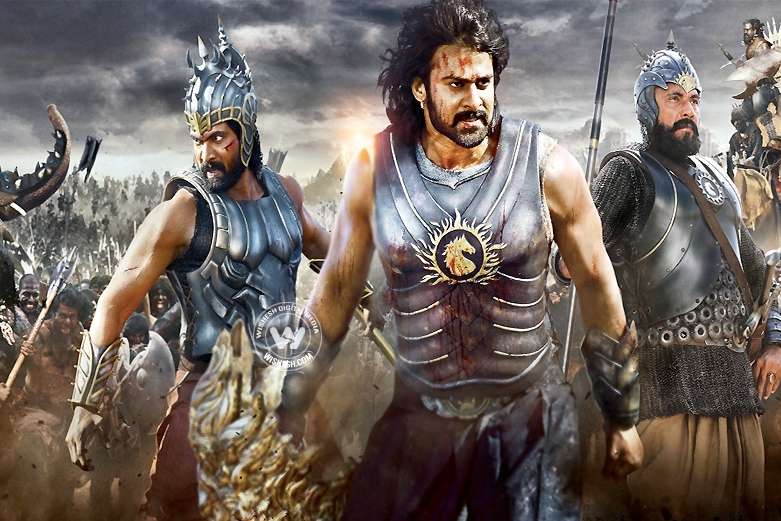 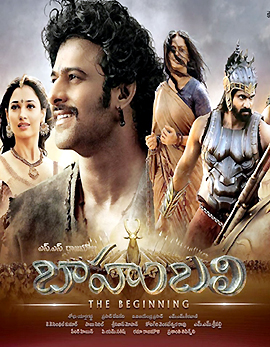 Shivudu (Prabhas) possess a few special skills right from the childhood. Those skills turns out to be a big mystery for the people around him. He falls in love with Avantika, whom he meets in an interesting situation.

As days passed, Shivudu comes to know that, Avantika along with her group, is doing her best to rescue the royal princes Devasena (Anushka) from Bhallaladeva (Rana), who arrests her at his place. In this process, Shivudu decides to support Avantika and regarding this, he enters the Kingdom named Mahishmathi.

After landing at the kingdom, he comes to know that he was associated with Mahishmati and Bhalaladeva in the past. How does Shivudu relate to Mahishmathi and Bhalladeva and what is that past, forms the rest of the story. 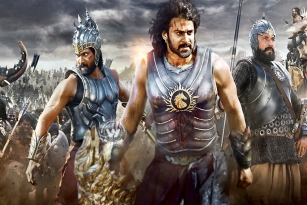 Baahubali is a sure shot magnum opus. Its extravagant sets, spectacular visuals and the sheer magnitude would literally give us Goosebumps. The Hollywood style can be felt in every scene. There are a few scenes, where we can only be left expressionless, opening the mouth wide. The narration is perfect in every scene. More than the dialogues, it seems, Rajamouli is concerned about the visuals. He could perfectly deliver the visual wonder on the screen.

However, the actual plot of the film starts in the second half, as of Magadheera. Especially the war sequences take the film to the next level. On the whole, Baahubali has all the abilities to prove the Telugu cinema strength, except a few of the dips in the second half, where the fans do not expect those from a director like Rajamouli.

Prabhas gave his heart to Baahubali. He showed a perfect variation in both the roles he played. In a few scenes, it would appear like, other than Prabhas, there would not have been any other actor who can handle the lead role in the film. In one word, his performance is not only a treat to his fans, but to the entire Telugu cinema lovers.

On the other hand, Rana as Bhallaladeva gave his terrific performance as a baddie. His height and dialogue delivery is perfect and with this performance, he has an every chance to be offered more big roles in the future. It is a sure shot challenging role for a young actor like Rana. Even then he took up it and is found successful.

Though Anushka does not have much to do in the film, her presence in the second half would bring loud whistles. Tamanna is perfect for the role she was offered.

Ramya Krishna as Sivagami is the third biggest person on the screen. She is elegant and in fact, her character brings a huge depth to the film. Nasser and Satyaraj play their roles perfectly. Other characters are found satisfactory.

Music by Keeravani will be elevated more with the way the songs are pictured. But a little care might have been taken in the background score. The CG works carry the major part of Baahubali. The production values are indefinable. The richness can be found in every frame. The camera work shows the hugeness in the film.

Art director, Sabu Cyril has done his best. The palace sets, the surroundings of the kingdom, warfare equipment and all such equipment is perfect. The VFX works at the waterfall scene and at a few of the war sequences are just brilliant.

Finally, Rajamouli, a sure shot pride of Telugu cinema has once again proved his stamina. He kept up all the expectations of the fans and the cinema lovers across the world, by giving a visual treat. His direction capabilities for Baahubali might even be the lessons to the aspiring future film makers. Though there are a few dips in the screenplay here and there, the way he presented them smashes those dips too.

If Baahubali is missed, your struggle to find the stamina of Telugu cinema might not be achieved again. It can undoubtedly make every Indian proud.