Saradagaa Kasepu is a comedy based movie in which, Allari Naresh and Madhurima playing  the main leads 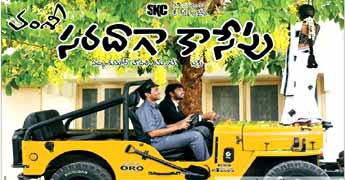 and Srinivas Avasarala playing an charcter of car driver.

The story of movie is about a guy who finishes his studies and roaming here and there without any responsibility so their parents arranged his marriage with some village girl.

Rajahmundry is just another location, Godavari is just a thinning river and the love story with layers of plot only deviates, and takes the focus off from the three main people in the film. Saradaga Kasepu which starts of interestingly sustains attention only as long as Srinivas Avasarala behaves high-handedly but the moment his character slips into being another routine and submissively funny in nature, it loses fizz. What you see is Srinivas giving meek expressions and Naresh talking away non-stop to the galleries. The viewers may be pardoned for anticipating, a reasonably engaging, down to earth and a humourous take on a changing nature of a love story from a filmmaker like Vamsi.

Saradaga Kasepu turns into a 'boring ga chaala sepu', all you do is wonder why a comedian who threatens to pull the zip off from the bag and take out the 'subham card' in the end doesn't do it much before. The film would have been atleast okay if there had been some other filler instead of Krishna Bhagawan's. His scenes with his wife, his colleague and MS Narayana is sheer agony. Ahuti Prasad shimmers but in a weird role of a disciplinarian who has a deep and an abiding love for his dead dog and hardly showers half his affection he has on the canine over his fellow human beings. The film unapologetically ends as a punishment far superior in nature inflicted by Ahuti Prasad on the moviegoers.

Ahuti Prasad has a daughter Manimala (Madhurima) who wears horrendously garish costumes and slips into duets every other moment, the director reduces the film which has a potential of being a good time pass into a farce that could have been handled by any inexperienced person. However there are a few dialogues that sparkle sporadically. The women in Vamsi's films do not have a substantial role to play now, neither are they made to look simple and beautiful.

The story is about Ranga Babu (Naresh) a driver, trading places with Sreenu (Srinivas Avasarala) on the latter's insistence as he wants to observe his bride before marrying her. Raja Rao (Ahuti Prasad) is informed about this ploy by Gajapati (Jeeva), Sreenu's father and he showers affection on the mentioned person accordingly. What he doesn't know is half way through the journey Sreenu changes his mind and comes out of the disguise of a driver and marches ahead as the real groom. The comedy of error ensues Ranga Babu falls for Raja Rao's daughter, and Chitti Raju (Krishna Bhagawan) as a lawyer has another plan. He wants to bump off Neelakantam (MS Narayana), brother of Raja Rao for a reason. The climax is anyone's guess.

P.S.: The publicity of Godavari in Vamsi's films should seriously stop if the story is not as beautiful as the river.