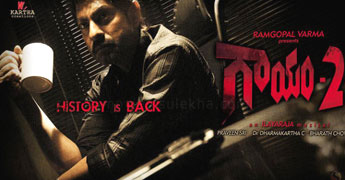 with a re-cap or rather a filler  of why Jagapathi Babu turns into Ram from Durga. He’s actually explaining to his wife Vimala (Vimala Raman) as to why he’d kept his identity under wraps. The movie moves like a snail showing the hero’s virtuosity at romance, a couple of slow numbers make you wonder if Praveen Sri suffers from a starting problem. So slow is the film that you can actually count the number of cups of coffee Jagapathi Babu had or offered his wife and customers. Luckily Kota Srinivasa Rao as a politician with criminal background stands as a rock giving some credibility to the film, without which one would be questioning the necessity for a sequel.

Kota as Guru Narayan is still nursing the only ambition of becoming a Chief Minister until his son Shankar Narayan sees Durga on television. He wants to bump his old rival off whom the world believes is dead and thus the son and the lawyer (Tanikella Bharani) embark on a journey to Thailand to make sure Ram is Durga. Does the director keep the hero alive to make space for a triology, to know that you got to suffer the ludicruous first part of the film where the characters are written lazily.

Jagapathi Babu does his own part, but the intensity and the volatile look goes missing. He doesn’t have the best lines. Thankfully even after years the film released he looks like Durga and the montage shots of the first part even provides a few minutes of retro thrill. Vimala Raman’s biggest contribution is to look apt, her pairing with Jagapathi Babu is perfect and she comes up with a convincing portrayal of a worrisome wife. Kota Srinivasa Rao doesn’t move from his home, he’s either on his chair or standing and talking over the phone but speedens up the drama, it’s touching to see the scenes involving him and his son (Kota Prasad).

A few dialogues in the drama throws up the irony of life, the actor who played an impetuous and impatient man brought to the fore his natural charm in delivering dialogues or expressions. Tanikella Bharani sparkles as a supportive lawyer. Harshavardhan’s comedy too seems forced. Finally Gayam 2 is a not entirely a vanity project for the hero where he appears in every shot, the fizz of Gayam goes missing, you don’t connect emotionally to the narrative but the director manages to stop the movie from being limp.