Aashayein - Journey from Darkness to LIGHT

Aashayein - Journey from Darkness to LIGHT

Synopsis : AASHAYEIN is a story of a compulsive gambler who discovers new meanings of fortune and life 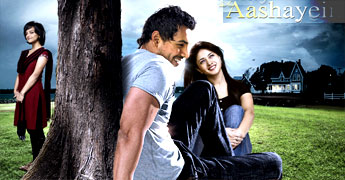 through a dramatic turn of events.

AASHAYEIN is a tale Rahul's journey from darkness to light. A journey about love, hate, death and above all hope.

The music of the film is given by Salim & Sulaiman Merchant.

John Abraham as Rahul Sharma - An angry, confused, compulsive gambler. Wishes to live the life he has been dreaming of.

Prateeksha Lonkar as Sister Grace - She will bend her principles for the greater good. Wishes to dedicate her life for the happiness of her inmates.

Girish Karnad as Parthsarathi - Fun loving, 'uncle' to everyone, stupidity stubborn on his principles. Wishes to be reunited with his family.

Farida Jalal as Madhu - Intelligent, virtuous, prostitute. Wishes to just lead a normal life and not be ostracized.

Anaitha Nair as Padma - She is impetuous, obnoxious, full of life. Wishes to experience love.


Music Review : Director Nagesh Kukunoor's "Aashayein" generates quite a lot of interest and many of the songs are hummable. The film, which stars John Abraham in the lead, consists mostly of love songs.

The album kickstarts with "Mera jeena hai kya" composed by Pritam Chakroborty and crooned by Neeraj Sridhar. This track is currently doing the rounds of music channels and is gaining popularity. It has a long prelude with soft music and then switches to rock after some time.

The track also has a remix, which is not that impressive owing to excessive and unnecessary beats.

"Dilkash dildaar duniya" is also a Pritam track with Shaan lending his soulful voice. The poignant love song is nice and hummable. The song also has vocals by Tulsi Kumar. The number surely makes for a good hear.

This track too has a remixed version.

After Pritam, Pakistani composer-singer Shiraz Uppal comes into the picture with "Rabba". There is nothing practically wrong with the track, but still it fails to create an impact. It has a heard-before feeling and lacks freshness.

Then composer duo Salim-Sulaiman come forward with "Ab mujhko jeena" with Zubeen Garg behind the mike. The song with a strong orchestration is interesting and foot-tapping. The inspirational song will finds many takers.

This too has a remixed version.

The next song by the composer duo is "Shukriya zindagi" sung by Shafqat Amanat Ali. The track with an optimistic approach is slow-paced and nice to listen to.

The song has two more versions - a sad one and a remix, which totally sounds unnecessary and doesn't go with the mood of the basic track.

Then Salim-Sulaiman offer "Pal mein mila jahan", a slow song with minimal musical arrangements. It has two versions. One a female version by Shreya Ghoshal and the male version by Shankar Mahadevan. Shreya's voice definitely creates an impact.

Finally there is Mohit Chauhan singing the melodious "Chala aaya pyar", a very hummable and breezy tune that makes you sway in harmony.

All the three composers have done their bit and have come out with a decent album that has much potential.