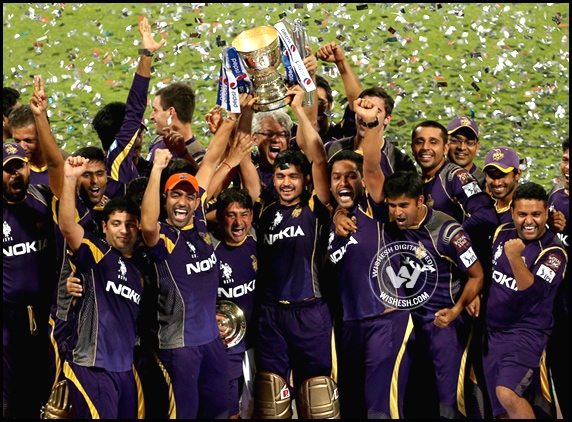 Kolkata Knight Riders have won the seventh edition of the Indian Premier League humbling Punjab Kings XI last night in Benguluru. Manish Pandey guided Kolkata to the title and it is for the second time, KKR have emerged as the IPL Champions.

Gautam Gambhir won the toss and put Kings XI to bat first. It was not good start for the Punjab, as Sehwag who scored a century in qualifier 2, was dismissed early. But then another opener, Vohra and Saha batted brilliantly. Vohra completed half century while Saha scored his debut IPL century and it is the first ton in an IPL final. At the end of Innings, Kings XI posted a huge total of 199 runs.

Chasing down the massive total, KKR maintained a consistent run rate. However, Robin Uthappa was removed in the first over by Mitchell Johnson. It was Manisha Pandey who took the charged and scored a boundary every over till he was dismissed. Gambhir, Yusuf Pathan, Shakib contributed their part and in the end, Piyush Chawla scored the winnings runs.

Manish Pandey was awarded Man of the Match, Robin Uthappa received the Orange cap for scoring most runs and Mohit Sharma of Chennai Super Kings was awarded Purple cap for being the highest wicket taker and CSK received the Fair play award.