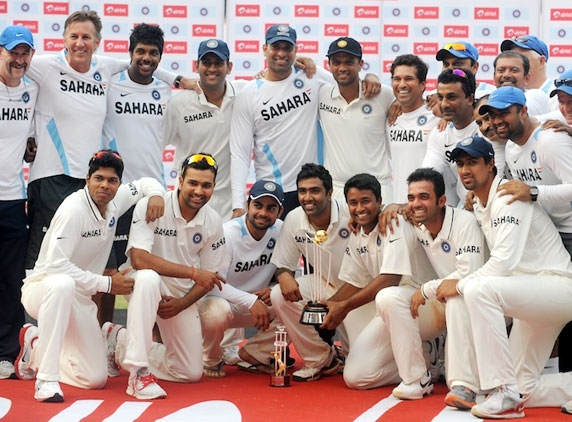 The third and final test match between India and the West Indies in Mumbai ended in a sensational draw with both teams sharing the honours. India won the three-test match series 2-0.

India scored 242-9 after being set a 243-run victory target and had to be satisifed with a 2-0 series victory after winning the opening two tests comfortably. Nobody thought that West Indies would be in a losing position, when they scored 590 in the first innings and dismissed India for 482, thus taking a 108-run lead. At close on Day 4, West Indies were 81/2.

However, the Indian spinners struck hard this morning and triggered a batting collapse. West Indies bowled out for 134 and set a victory target of 243 for India.  Gambhir did not last long, but Sehwag and Dravid added 82 runs for the second wicket. After being let off on three occasions, Sehwag finally fell at 60 off 65 balls. After Sehwag's departure, India lost Tendulkar (3) and Dravid (33).

At 113/4, India were in danger of losing the test match. However, Virat Kohli (63) and VVS Laxman (31) raised the Indian hopes. After Laxman's departure, India lost a few more wickets. Kohli's dismissal proved to be the turning point.

The match went to the last over with Aswhin and Ishant fighting out their heart and soul. India needed 3 runs from the last over to win the match. However, Varun Aaron lost a few balls and Ashwin could managed to take one run off the last ball to end the Indian innings at 242/9. India fell short of the target by just one run.

Thus, the match ended in a draw and India won the series 2-0. West Indies played too bad cricket today despite holding the edge for the last four days. They almost lost the match, but their bowlers saved the day for them.

Ravichandran Aswhin, who made a debut in this series, won the 'Man of the Match' and 'Man of the Series' awards for his splendid performance with the bat and ball. He will be gearing up for the Australian tour. Before that, we have an ODI series against the West Indies here.