Vettel: It’s a new circuit, new track for all of us, which makes things tricky. I’m extremely happy. It’s an interesting race, a challenging circuit, so I am looking forward to tomorrow.
https://www.andhrawishesh.com/ 29 Oct, 2011 29 Oct, 2011 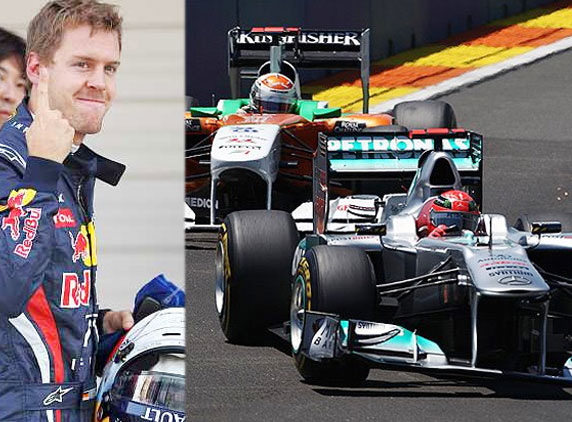 Red Bull Driver on his thirteenth time claimed the pole Saturday for the inaugural Indian Grand Prix at the Buddh International Circuit (BIC) in Noida. He clocks 1'24.178. McLaren's Lewis Hamilton finished second with 1'24.474 on board, while Vettel's team-mate Mark Webber finished third with a time of 1'24.508.

Vettel’s timing was three tenths of a second faster than Hamilton, who was second fastest but will drop to fifth because of a rules infringement in Friday practice. But for Vettel it would be an easier drive tomorrow after today’s experience say experts, at the BIC track.

Former British driver Nigel Mansell set the pole record of 14 in winning the world title in 1992, though there were fewer races then.  Vettel says he isn’t motivated by the chance to break that record, nor equal Schumacher’s mark of 13 race victories in a season. Vettel needs to win all three remaining races to achieve that feat. Meanwhile India's Narain Karthikeyan driving the HRT car finished 22nd, while his team-mate Daniel Ricciardo finished one spot ahead.