England exploited predictability of India's four-man bowling attack, Andhrawishesh will be found either in News and World or in the Andhra News for your instant updates, A near capacity crowd patiently waited for the match to begin and when it finally did, five hours late in cold, blustery conditions, the early excitement was provided by diminutive left-hander Parthiv Patel.
https://www.andhrawishesh.com/ 07 Sep, 2011 07 Sep, 2011 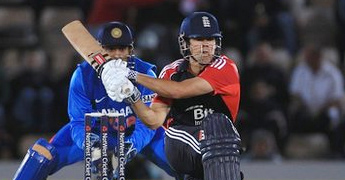 After Saturday's opening match was abandoned, rain reduced the contest at the Rose Bowl to 23 overs per side.

But Craig Kieswetter fired three sixes in 46 and Cook hit five fours and a six as England won with five balls left.

A near capacity crowd patiently waited for the match to begin and when it finally did, five hours late in cold, blustery conditions, the early excitement was provided by diminutive left-hander Parthiv Patel.

The seam movement Cook expected when he won the toss and asked India to bat was not evident, and on a flat surface Patel dispatched Tim Bresnan beyond mid-wicket for two sixes in the third over before a fierce flay at James Anderson resulted in a fine nick to wicketkeeper Kieswetter.

Rahul Dravid (32 from 31 balls) shared a fluent 79 in 11 overs with Rahane, who recorded his maiden half century from 40 deliveries in only his second ODI.

Favouring the classical stroke, Rahane's stylish innings ended in the 19th over when Graeme Swann took a smart catch at full stretch above his head.

Raina demonstrated his hitting capabilities with a six and two fours in three balls against the experimental variations of pace from Jade Dernbach, whose five overs went for 49.

The left-hander added a remarkable drive on one knee over cover for six more off Bresnan and was on course for the fastest Indian ODI fifty before a towering top edge was calmly taken at deep square-leg by Ben Stokes, while Ian Bell completed his third catch in the deep with a brilliant diving effort low to his left to dismiss Manoj Tiwary.

Kieswetter gave the England reply early impetus, backing away to launch Vinay Kumar around 30 rows beyond the mid-wicket fence in the second over as 40 came from the first four overs.

India tried spin in the fifth over but Ravichandran Ashwin was driven for successive sixes over long-on by Kieswetter, who fell lbw pushing forward to Vinay in the seventh.Bell survived a caught and bowled chance when 11 but he and Cook effortlessly reduced the required rate from an original rate in excess of eight per over to 85 in 13 overs against some indifferent Indian back-up spin and medium pace.

Bell drove Ashwin to extra cover but Cook, having played a 'Dilscoop' early in his innings, also hooked for six in reaching 50 from 37 balls.

With 23 still needed Ravi Bopara was caught for a useful 25 but Cook remained, leaving India and their passionate supporters still without an international victory on the tour as the series heads to The Oval for the third match on Friday.