After taking a break and hearing to n number of scripts, Rohit has agreed to strike again, with another ‘Solid Love Story’, ‘Solo’. The audio of the film was launched recently and the film is set for a release soon. Andhrawishesh team met the Hero and the Director of this flick
https://www.andhrawishesh.com/ 25 Oct, 2011 25 Oct, 2011 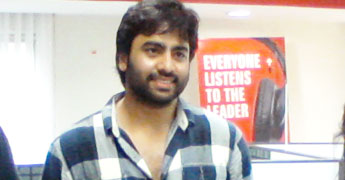 When ‘Baanam’ strike, everyone came out with the comment about the film, stating it to be a critically acclaimed film. This is a compliment to the film, in today’s Telugu Cinema, where almost many stereo type films are coming up. Particularly, the Hero and his Voice, his guts of experimenting with the role right in the first film, all were the points of appreciation. After taking a break and hearing to n number of scripts, Rohit has agreed to strike again, with another ‘Solid Love Story’, ‘Solo’. The audio of the film was launched recently and the film is set for a release soon. Andhrawishesh team met the Hero and the Director of this flick. While Director Bujji chose to stay calm and only watch the Hero, Rohit talks to Andhrawishesh about ‘Solo’, ‘Baanam’ and ‘Films’;

Life has been a roller coaster ride. The story and screenplay along with the role all these factors put together made me accept the Movie ‘Baanam’, that is though my debut Movie, has given me much recognition that I needed and the movie even though was not a commercial success, managed to earn average returns and critical acclaim. Soon after the film, many offers of similar serious kind of roles came up to me. I always craved for showcasing a variety in my films and roles and never wanted to repetitive or similar roles. So, I have waited all this time for an attractive Script. Then, director Bujji of ‘Yuvatha’ fame came up with the script of ‘solo’ to me that attracted me to the core and as soon as I heard the narration, I have decided to take up the role. That’s the story behind ‘Solo’ and my journey from ‘Baanam’ to ‘Solo’.

This is for sure a complete entertainer and love being the centric of the film. It is a story of a Guy and how he would be able to win his love. Though the line seems to be similar, the screenplay makes you very interested to watch the film. We have worked very hard for the film. Though it has been close to a year, the project has actually started; the shooting of the film was completed within 45 days. The tag of the film is ‘A Solid Love Story’. And yes, this is a Solid story of a Guy who is in love. NishaAgarrwal is playing the lead opposite me in the film and Prakash Raj being another Pillar for this flick. He has been so supportive and the story and screenplay of Bujji, made him accept the role in this flick. People in ‘Baanam’ have seen me as a matured hero, but with ‘Solo’ everyone would get to see the actor in me and I am happy to disclose the same.

He is for sure ‘Melody Bramha’. He has given me some very catchy tunes in my debut film ‘Baanam’ as well, one of them being ‘Naalo Ne Lena’. Till date, audience would remember the song. Even in ‘Solo’, Mani Sharma has given me some good music. Out of the entire Album, atleast 2 to 3 songs are my favorite. The audio of the film has been released recently, and I wish all you music lovers out there would listen and enjoy the music of ‘Solo’ as we are planning to release the Movie soon.

Bujji and I would no more shares a Director – Hero relationship, but we are more of friends today. It could be because I and he sharing the same thought process, our way of understanding Cinema being the same, and the amount of passion inculcated in us towards film making, all these things put together has made us close to each other. Today, I can definitely say, even in near future I would love to do a film again in the directorial of Bujji. He is a very talented director and very lively person to work with.

Getting into films itself was my dream, so there are no dream roles in particular to me. I need to do as many films as I can, showcasing variation in each role and sustain in the industry for more long years.
Yes, I do have a dream of starting up my own production house, but I am still working on it.

About heroine of the film

I remember the time when I and Bujji were searching for a heroine to our film. we have seen many heroines, and in the due course, we saw ‘YemaindiEeVeela’ coming on T.V. both I and Bujji were convinced 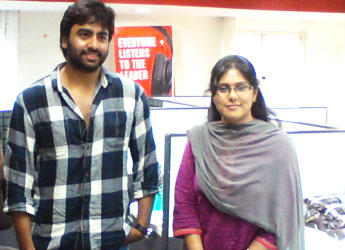 with the factor that, though the heroine of the film, NishaAgarrwal is a new comer, she was capable of handling her role of the ‘solo’ heroine in the film. Then we decided to cast her in our film too. Initially, many opposed to this thought, but we had a belief in her and after the film’s release you would know how important her role is in the film. Nisha has carried her role with lots of grace and she has a long way to go.

Lot many changes, some for better and some not, much more matured technicians coming in this industry, the variety of scripts and work we are getting to do and Telugu Cinema’s scope today has been widened. On contrary, piracy, all the issues that are creating hurdle in the shooting and releases of the films that is in turn affecting the market of Telugu Cinema are creating many obstacles. I would say development and problems are going hand – in – hand, when it comes to Telugu Cinema.

Like any other teenager, even I aspired to become a Engineer and pursued my Engineering. It was my father who always felt that I could be a better Actor and encouraged me to make my career in films. Initially, I was not very keen for this thought. But, later on even I started feeling positive and wanted to explore in this career. With the same thought, after my Engineering, I pursued a film making course in America, to understand Cinema and this is how I am here today.

What audience can expect from ‘Solo’

A proper entertainment. Because even before accepting the script I here the narration of any story as an audience and put a question ‘why should I watch this film?’ the answer itself makes me to decide it If I should do the role or not. And from ‘Solo’ one can expect a ‘paisa vasool’ for the amount invested in the ticket.

With his way of roles and films, Andhrawishesh hopes Nara Rohit would bag a success with ‘Solo’ – A Solid Love Story!