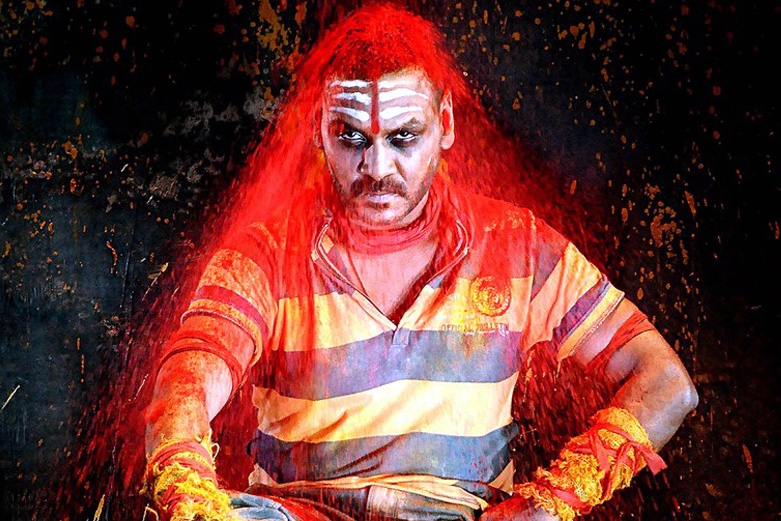 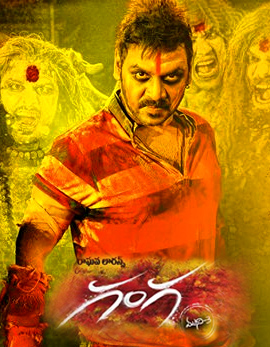 Raghava who is very scared of devils works in a private TV channel. On the other side Nandini(Tapsee) is a daring  lady who also works in the same channel. There is another channel which is a good competitor of the former ones. So to beat up that channel, Nandini plans a program which is related to devils. Along with Raghava and channel unit, Nandini goes to a village where there is an old bungalow. The intention was to shoot the devil program there, but actually that was already a devil's bungalow which is later known.

One fine day, Nandini goes to a beach nearby the bungalow. There she finds a “Thaali”(a typical hindu's custom thread to be tied to bride while marriage) on the ground, and after taking it out, the problems starts arising to her and the whole team. Nandini then turns to Devil. The rest of the story is of how that “Thaali” is related to the script and whether Nandini is out of that problem or not ? 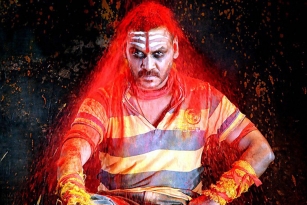 Lawrence is the one who attempted a different type of horror scripts where he tried to blend comedy with it and gave a perfect entertainers like Muni and Kanchana. Following him there are few movies like Prema katha chithram where they were managed to be successful. Now Lawrence could be the best in this series. The 3rd version of Muni, 'Ganga' can also be treated as the perfect entertainer. Just like Kanchana, Ganga too entertains audience with its comedy and at the same time creates fear too. He made a much more perfect blend of both the genres this time.

The major difference between Lawrence and other directors is, he makes the lead character too get frightened of the devil; whereas, in other thrillers or horror flicks, the lead is shown as a daring dynamite.

In Kanchana, Lawrence takes his mother to the bathroom and now in 'Ganga', he appoints a security guard to assist him there. This can be much more funnier when it is watched on the big screen. The expressions of Lawrence in the scenes like this makes the audience roll down and laugh.

Further Lawrence dropping 6 devils in a song can be a treat to the mass audience especially. The intention behind that song is seems to attract those masses. Kanchana was focused on 'Eunuch' and now Ganga is focused on physically handicapped.

In most of his movies, be it Kanchana, Rebel or Style, somewhere or the other, Lawrence adds some part of physically handicapped people's portion, but this time, it seems to be like he concentrated much more on them.

Coming to Nityamenon, her character comes in the flashback, it is beyond telling in words, so it is better to watch her on the screen, to experience the liveliness and the biggest surprise related to her character.

The film takes of well in the first part, the second part is also ok, but if the some more care was taken,  it might be very good. Kanchana's climax was very emotional and that was connected to audience at that time. But Ganga's climax might not connect to the normal audience. The revenge of devil might not be owned by the people and Lawrence might have took much more care in this aspect. But whatever, the overall quality of the movie is very good and Lawrence could mark his identity again in this typical genre.

Lawrence had managed to give his best again, he was seen in three different dimensions. In Raghava character he was able to make comedy and make the audience burst out of laughing. The other character is Shiva, where he got a chance of showing his heroism, the other one was the devil's character and here, he is proved to be his best after Kanchana. The variations in all the three characters were perfectly shown by Lawrence. He had a perfect idea of what the audience reaction would be for few expressions and accordingly, he managed to give the best output regarding his acting.

Both the beauties, Tapsee and Nityamenon were given the best memorable roles. Their characters are more of performance oriented. That is the dream of any actresses in the film industry and Lawrence could fulfill these two actresses dream perfectly. Specially Tapsee in devil's role had  a super scope to prove of what she is. She might at least now come into lime light again in Tollywood with some more performance oriented roles. And as said, Nityamenon's character is suspense, the feel can be lost if described. Jaya Prakash in villain role is good and Kovai Sarala had again entertained with her comic timing just like in Kanchana. Srimaan and Manobala were also found satisfactory in their roles.

Music by Thaman is ok, but his re recording work was superb for few scenes in the movie. Except a single song, all the songs are mass numbers. The editing might have been much more better, especially in the second half, many scenes are lagged with no purpose. The main fault in the movie is the graphics in the climax. While watching the climax, it seems to be like a typical video game which involve childish and silly graphics.

There is no space for vulgarity or any big complaints. Ganga will take you to a new fun world where you get scary but even laugh at the same time. A must watch movie for this Summer.