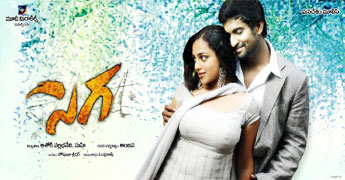 Right from the launch of ‘Sega’, was announced, there were many things that excited the audoience. Some of this is another Female Director making her directorial debut in the industry, ‘Ala Modalaindi’, sizzling pair Nani – Nitya Menon, teaming up once again with this flick, the film being a bilingual and what not. But, looks like ‘Sega’, did not match to the audience expectations. The story appears to be realistic. It is good that debutant directors are thinking more beyond, just any other love – Mass element. But, the Movie would have been earned good reviews if the director would have concentrated on the screenplay and accuracy of the sequences. To know more, read further;

The story opens with highlighting North Chennai slums where two young boys are left alone with no family. A helpful natured person Sekhar takes care of both these brothers and they grow up. Sekhar these brothers Balaji (Muthukumar) and his sibling Karthik (Nani) and makes them study.

Karthik spend most of his time with his close friend Vishnu (Karthik Kumar) who hails from the same locality and maintains a bike workshop. As years pass by Revathy daughter of Sekhar who works at a Xerox shop, falls in love with Karthik.

The story moves further and at one point Vishnu meets Vani (Bindu Madhavi) who is a call girl and falls in love with her. Knowing that Vishnu is in love with Vani, Jothi who is a drug dealer decides to use him for his drug dealings. He assigns him a task of transporting drugs to Pondicherry and Karthik also joins him in this dealing. Vishnu accepts to take up this deal as he wants to take Vani from that place. But at one point of time Vishnu comes across the truth that it was a plan by Jothi to kill him and he returns to Chennai. It was on the same night Vishnu gets killed and the guilt falls on Karthik as he accompanied him.

Nani did his best to be as Natural as possible while he appear as Karthik. Nani’s character required to emote a lot of expressions in the different sequences, with different people, that Nani had successfully done. Karthik Kumar as Vishnu played upto the role. Nithya Menon did her best but her character have not demanded not much from her. Bindu Madhavi, when compared to all her prior films, did her best in this film. She is lucky enough that her character has been shaped up in such a level. Muthu kumar did his best. Rest of all other roles are upto the mark.

Music by Joshua Sridhar is melodious and fit the story line, turned out to be one of the highlights of the film. Cinematography by Om Prakash was eye catchy especially in the song sequences. Editing by Anthony is was upto the mark in the first half. In the second half, the chain that connected the film, missed somehow.

Debutant director Anjana Ali Khan has definitely chosen a bold subject with opting of such a bold storyline that shows the darker side of society such as Drugs and Prostitution. But, the director failed to manage the connect of the sequences and shape up the screenplay of the film in such a way that it would have attracted the audience. ‘Sega’, fails to make the audience sit and watch the film through out in the theaters.

‘Sega’ fails to create the heat!!!