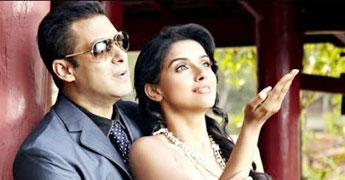 After the blockbuster success like ‘Dabanng’, Salman Khan in ‘Ready’. The film is a re make of a Superhit film in Telugu, Sreenu Vytla’s ‘Ready’. Well, in Hindi, ‘Ready’ seems to be an average entertainer. The film is particularly for ‘Family’ audience. But certain ‘B’ rated comedy sequences do not allow the audience to watch the film with their entire family. The film is a disappointment to all those who expected another action packed entertainer from Salman after his ‘Dabanng’. But we should agree to the fact that, ‘Ready’ had an amazing opening collections so far.

After formal introductions of starcast, Sanjana Singh (Asin) runs away in order to escape from the unwanted marriage, as her uncle’s plan her to get married to either of their sons in order to take over her property. In this process, Sanjana meets Prem (Salman) and confesses everything. They both fall in love. The rest of the story is all about how Prem plays mind game in order to change Sanjana’s uncles and get married to Sanjana.

Most of the sequences in film are taken from the original Telugu version. Director of Hindi version, Anees Bazmee created certain sequences in the re made version. In order to create more entertainment, there were some comedy scenes, comedy apart these were vulgar. Salman tried to give his best, but his role is more of comedy that Action oriented. Asin did her bit too, but she looked very much older and plum in this flick. Rest all characters did their bit as per their characters were designed. Coming towards the Music, much talked about ‘Dhinka Chika’ song tune, was a copy from a Telugu film, but T – Town music director Devi Sri Prasad who debuted in B – Town with this song, earned good reviews. Another number ‘Character Dheela Hai’, where Heroine Zareen Khan (who debuted with Salman’s ‘Veer’) gave a special appearance is ok. Overall, for those who did not watch the original version of the film, Salman’s ‘Ready’ is a onetime watch.

Director Anees Bazmee, succeeded in making a OK film. The comedy track in the film, worked here and there. The pre and post interval bang was quite eye catchy. Music by Pritam scores good points, but the Back ground score was a bit too louder in some sequences. Cinematography by Sunil Patel was upto the mark.