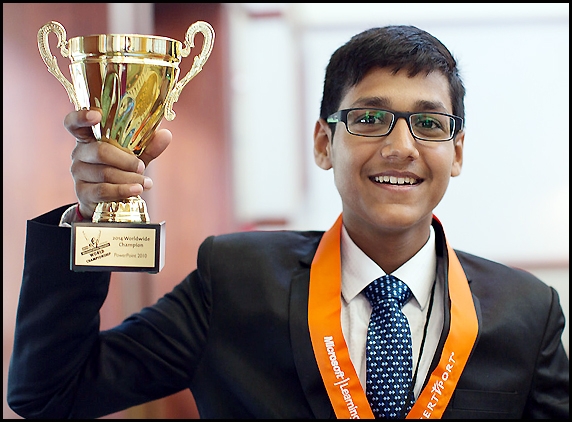 A 16 year old from Delhi has been named as the 2014 Microsoft PowerPoint World Champion defeating over 4 lakh contestants from 130 countries.  Arjit Kansal, a student of Maharaja Agrasen Model School Pitampura in Delhi competed with 123 finalists in the conclusion round where participants were given unique project-based tests to demonstrate their ability to create presentations for the information presented in PowerPoint.

The Microsoft Office Specialist World Championship Student Awards ceremony was held at Disney’s Grand Californian Resort and Arjit Kansal was awarded with USD 5,000 scholarship. This event was held from July 27 to 30th  to test the skills in Microsoft Word, Excel and PowerPoint. Arjit was sponsored by CyberLearning.