After the launch of the Mars Orbiter Mission (MOM) on Tuesday from Sriharikota, it is keeping good health says ISRO scientists.
https://www.andhrawishesh.com/ 07 Nov, 2013 07 Nov, 2013 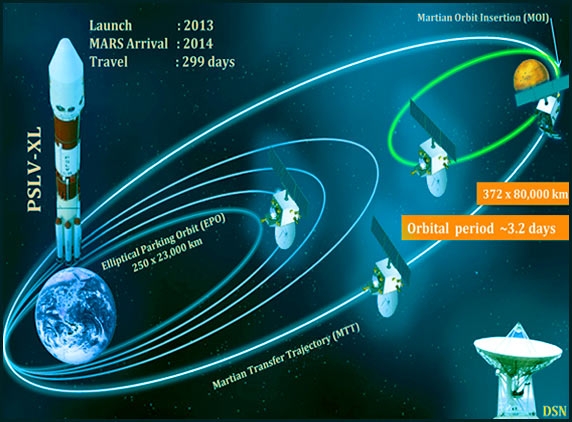 After the launch of the Mars Orbiter Mission (MOM) on Tuesday from Sriharikota, it is keeping good health says ISRO scientists.

The satellite is still in the Earth orbit and remains so till December 1. MOM that is to be under the influence of earth till that date will move around earth in a long elliptical earth orbit. Now the apogee is 28786 and perigee is 248. The velocity added is 138 m per second. So far the consumption of the propellant is 60 kg.

Now the monitoring of MOM is shifted to ISRO Telemetry Tracking and Command Network from where it will be monitored and controlled to navigate it towards its destiny.

The satellite will be fired again on November 8, 9, 11 and 16 to accelerate to reach the required velocity to get released from the Earth’s gravitational pulling.  After going out of the gravitational force of Earth on December 1, it will travel for 9 months to reach Mars.

After getting out of the Earth’s influence, the satellite will be in the orbit of Sun.  The elliptical orbit around Sun is designed in such a way that it gets into Mars Orbit in the month of September 2014.

The MOM is scheduled to start travelling towards orbit of Mars on 24th September 2014.