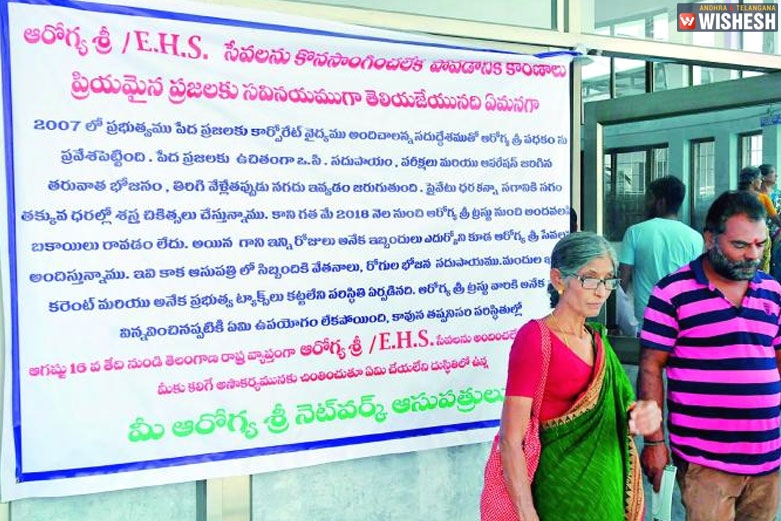 TS Private Hospitals Stop Aarogyasri Service:- About 230 private hospitals in Telangana have stopped treatment for patients who relied on the Aarogyasri and Employee Health Scheme (EHS). This move would affect the lives of thousands of patients in the state.

Aarogyasri is a unique Community Health Insurance Scheme implemented by the state government for the people below the poverty line (BPL). Under the scheme, private hospitals provide free treatment to patients and the government will reimburse them later.

Almost a month ago, the Telangana Network Hospitals Association (TNHA) had submitted their memorandum to the Health Minister, making a plea to him to immediately clear their pending dues, failing which they warned to stop the services. However, as the government failed to clear the dues, the association went ahead with their protest.

After talks with representatives of TNHA, the minister said that the dues amount to only Rs 600 crore and that the government will immediately release Rs 200 crore. He said the decision on the demand to increase the charges for various services would be taken after consultation with Chief Minister K Chandrasekhar Rao.

TNHA, however, maintained that the government has to pay dues to the tune of Rs 1,500 crore.

Speaking to The News Minute, TNHA state secretary Hari Prakash said, “The government hasn't responded positively. They are claiming that they would release Rs 200 crore next month. So we are continuing with our protest.”

“We would be providing first aid to the patients (Aarogyasri beneficiaries), but we wouldn't treat them,” he said.

The TNHA claims that they are tired of the government paying a small amount as reimbursement, each time they protest and now they have been firm on their stand that they wouldn't treat the Aarogyasri beneficiaries unless the government clears all the pending dues.

Before going ahead with the protest, on August 10, the association members had protested at Dharna Chowk near Indira Park in Tank Bund, demanding the government immediately address their issues. However, the government released only Rs 100 crore after their protest.

The association at the time submitted a memorandum to Aarogyasri CEO K Manicka Raj and the Health Minister Eatala Rajender on July 15 notifying their protest.

Earlier in December 2018, TNHA had stopped the Aarogyasri and EHS services for more than 10 days which affected the poor availing health services.