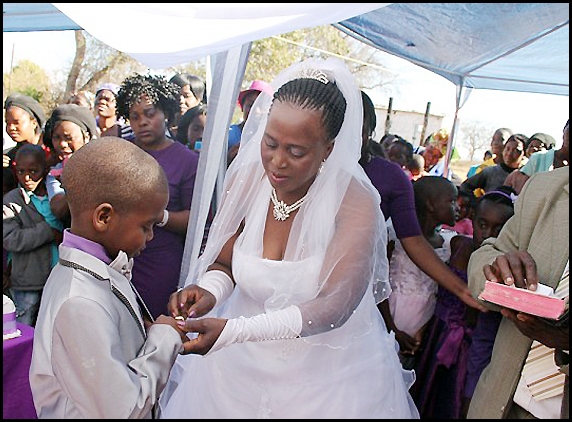 A nine year old school going boy has become one of the world's youngest grooms for the second time by marrying his 62-year-old wife again after claiming that he had been told by his dead ancestors to wed. The school boy,  Saneie Masilela married mother of five Helen Shabangu wedded in Ximhungwe in Mpumalanga, South Africa, in the presence of 100 guests and also her long term husband, children who are thrice and twice age of Saneie.

Saneie married Helen last year but the boy insisted for a traditional South African style of wedding. The family of the boy, supported the decision and added that it was just a ritual, not legally binding. Saneie's mother who strongly believes in couples unity is necessary and said, “He was fine and he was happy about the ceremony last year and it what he wanted he was not shy. After the wedding last year people keep asking them question like will they live together, sleep together, have babies but I keep telling them that after the wedding everything went back to normal nothing changed. Sanele moved to Venda not long after the wedding because he wanted to learn a new language, but they are very close.”

The nine year old Sanele said he hoped he would have a proper wedding to a woman his own age when he was older. “I told my mother that I wanted to get married because I really did want to. I'm happy that I married Helen but I will go to school and study hard. When I'm older I will marry a lady my own age,” added the young groom.