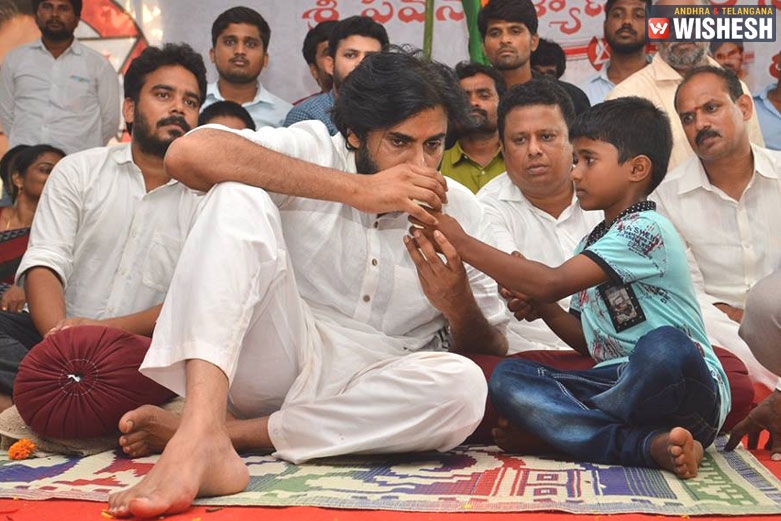 Pawan Kalyan Ends His One Day Fast On Uddam Kidney Ailment:- Actor-politician Pawan Kalyan on Friday ended his one day hunger strike, demanding the government of Andra Pradesh to find a solution to the kidney disease in Uddanam region of Srikakulam district.

The chief of Jana Sena Party launched the hunger strike at the place where he is staying in Etcherla mandal (block) of Srikakulam district at 5 pm. He will continued the fast at Srikakulam town amid people till 5pm today.

Jana Sena leaders said on Saturday that, Leaders of the Left parties will also call on Pawan to express their solidarity with his fast.

Pawan, who is currently on a state-wide tour, had earlier demanded that the state government find a solution the problem in 48-hours, failing which he will go on hunger strike. He has said that Chandrababu Naidu government is not interested in solving people's problems and it is focused only on their votes.

The actor said that the Uddanam problem was taken to the notice of the government but it had failed to respond to the situation.

Leaders and activists of Jana Sena will observe fast in Vijayawada to express support to their leader's protest. The party is demanding that the Telugu Desam Party (TDP) government take immediate steps to safeguard the health of affected people.

Jana Sena has urged the government to immediately set up a research centre to find out the reasons for high incidence of kidney ailments in Uddanam.

Stating that the Sri Lankan President is personally monitoring the areas affected by kidney diseases, the party is demanding that Chief Minister N. Chandrababu Naidu focus on Uddanam. It is also demanding that Naidu immediately appoint a Health Minister.

Pawan had visited Uddanam in January last year and had set two-day deadline for the government to spell out how it proposed to help the victims.

He had later met Naidu on the issue and expressed his satisfaction over the measures announced by him. Jana Sena chief now said the state government tried to wash its hands off by starting only three dialysis centres.

Pawan claimed that over 20,000 people of all age groups have died of chronic kidney diseases in the region during the last two decades.

He said lakhs were affected with this chronic kidney disease known as 'Uddanam Nephropathy' and alleged that successive governments could not address this issue effectively.

Ideologies vary from person to person. But, ingraining feelings of compassion, and a fire to do something worthwhile is important,…