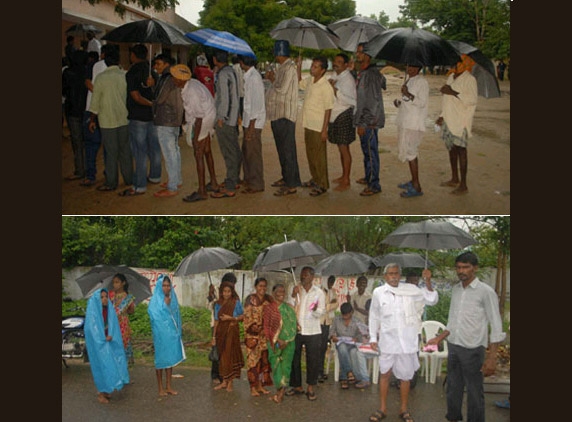 In spite of the rain voters in Nizamabad district are queuing to franchise their vote in the Panchayat elections. The contesting candidates are helping the old and sick who cannot move to reach the polling stations.  25% of the polling was recorded at Nizamabad and Armur Mandals by 9.00 a.m.

Voters of Chiluvuru village in Duggirala Mandal in Guntur District stopped the poll agents to enter the polling station protesting that they were deprived of payment.  Later the leaders reached the spot and convinced the voters.

Panchayat elections were banned by the Lakshmipuram colony voters in the Parchuru village in Prakasham district in protest of the unrepaired main roads during the last 10 years.  They were 180 voters in number.  They question why the leaders are to be elected when they do not care for the problems in the village.

A voter was caught trying to bring ballot papers out in Kanchana Putturu in Chittore District.  The police apprehended him.

150 voters’ names are disappearing in the voters list at Gollapuram Panchayat in Hindupuram Mandal in Ananthapur district.  The voters are protesting for the removal of their names from the list.

Two people were hurt in the clash between the supporters of Congress party and YSR Congress party at Guvvala Harijanwada polling station in Rayachoti Mandal in Kadapa district.

Out of 136 panchayat elections to be held in Adilabad district, 7 were postponed due to heavy rains in the district.