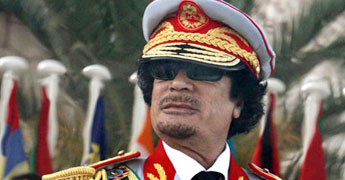 In a major development, the rebel fighters of the Libya’s National Transitional Council today captured the Libyan leader Col Meammar Gaddafi alive but reports said he died of the bullet wounds later.

Al Jazeera channel claimed that the leader had died after the rebel forces, backed by the NATO Army, shot him in his legs while fleeing. Reports said the shooting took place in Gaddafi’s native town Sirte.

Two months ago, the rebel forces took control of the country’s capital city Tripoli and established a transitional government but Gaddafi remained elusive all these days. However, his son was captured alive by the rebel forces in the Sirte town.

With the news of the death of Gaddafi spreading like wildfire, the people of Libya ran into ruptures and began celebrating, according to reports.

Television broadcasts showed footage of NTC troops celebrating the fall of Sirte and the apparent capture of Gaddafi, who was wanted by the International Criminal Court for crimes against humanity.

There were fierce gun battles on the streets of the coastal city in the morning, bringing an end to a siege which has lasted almost two months since the fall of capital Tripoli to rebel troops in August.

“Our forces control the last neighbourhood in Sirte,” NTC member Hassan Draoua said.  “The city has been liberated.”

NATO said it was checking reports of the capture of Muammar Gaddafi in Libya and said they could take some time to confirm.

‘’We are checking and assessing the situation.’’ a NATO official said. ‘’Clearly these are very significant developments, which will take time to confirm. “

Gaddafi has been rumoured to be hiding in Sirte for many weeks, although it was also believed he may be in his desert stronghold of Bani Walid, to the south.

“I’ve seen him with my own eyes.” he said and displayed a picture of Jabr’s body.

“Moussa Ibrahim was also captured and both of them were transferred to our operations room.”

Libya's son Mo'tassim was reported to have been captured alive.

Colonel Roland Lavoie, spokesman for Nato's operational headquarters in Naples, said its aircraft today struck two vehicles of pro-Gaddafi forces "which were part of a larger group manoeuvring in the vicinity of Sirte".